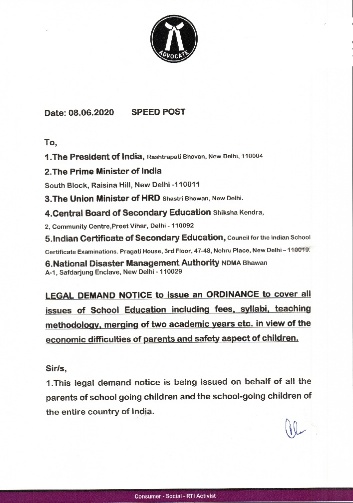 Amidst the country-wide closure of schools and uncertainty about their re-opening and fees payment, a Chandigarh-based advocate has called for bringing an Ordinance on the issue. By way of a Legal Demand Notice sent to President of India, Prime Minister of India, HRD Minister, Central Board of Secondary Education, Indian Certificate of Secondary Education and the  National Disaster Management Authority, Advocate Pankaj Chandgothia has demanded the issue of an ORDINANCE to cover all issues of School Education including fees, syllabi, teaching methodology, merging of two academic years etc. in view of the economic difficulties of parents and safety aspect of children.

Chandgothia pointed out that the Supreme Court in Charan Lal Sahu v. UOI, AIR 1990 SC 1480, has recognized the doctrine of ‘Parens Patriae’ and held that the Government has sovereign power of guardianship over persons who are not in a position to protect their rights and interest. Under such circumstances, Govt. must intervene and fight for their rights. A doctrine that grants the inherent power and authority of the State to protect persons who are legally unable to act on their own behalf.

This was so done by the Govt. of India when it enacted the Bhopal Gas Leak Disaster (Processing of claims) Act,1985, to provide relief to the victims of the unprecedented tragedy. The Supreme Court upheld it saying there were sufficient grounds for enacting such a special law to create a differentiation and different treatment.

In the same manner, there is an urgent need for enacting law

protecting the constitutional rights of citizens, particularly the parents and their school-going children. Supreme Court has even said that “To do a great right” after all, it is permissible sometimes “to do a little wrong”.

Chandgothia says that the Government is aware of its powers and duties as it has already issued various Ordinances to deal with the difficulties of various sectors such as The Insolvency and Bankruptcy Code (Amendment) Ordinance, 2020 enacted to provide immunity to certain category of bank defaulters on or after 25.03.2020.

Crores of people are concerned about the school education of their children in these uncertain times and a holistic decision needs to be taken by taking into account all attendant factors such as academic study, academic year, examinations, promotions to next class, methodology of study, payment of school fee etc.

The said Ordinance, inter-alia, must necessarily provide for the following and be made applicable All-India, and over-ride all existing local and State laws:

Ordinance on the above lines is utmost necessary also because there is no definite or precise Act or Law covering school education in its comprehensive form and all its aspects. Different State Governments and UTs have their own perception and rules to deal with issues arising out of school education, leading to an air of uncertainty and dis-illusionment amongst the parents. Hence, an All-India law in the form of Ordinance with compulsory applicability, all over India, is the need of the hour.

Chandgothia also pointed out that various Courts of various States and UTs are being inundated with petitions seeking various kinds of relief and relaxations, which is adding to the state of uncertainty, confusion, fear and depression amongst parents.  Nation-wide surveys amongst parents show that they do not want to risk the life of their children and would not send them to schools even if they open, since it is impossible to maintain social distancing and other containment measures like wearing of masks and maintenance of hygiene amongst school-going children.

Chandgothia said that if an Ordinance cannot be issued, in the alternative, an emergency order, similar to the Ordinance, can be passed by using the special powers available under the invoked Disaster Management Act, 2005.