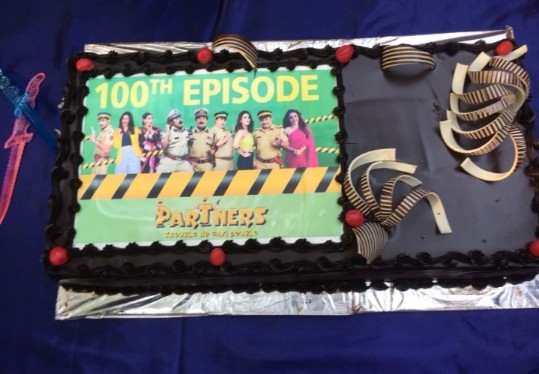 Sony SAB’s popular show Partners- Trouble Ho Gayi Double has received a lot of appreciation from audiences and through their support has completed 100 episodes. The comedy drama was launched in November 2017 and has impressed its viewers with its engaging cast and intriguing storyline. To commemorate this wonderful achievement, the cast members got together for a special celebration on the sets.

The show’s stellar cast of Johnny Lever as Comissioner Gogal, Vipul Roy as Inspector Aditya, Kiku Sharda as Manav and Neha Pendse as Chamku are amongst the characters who have entertained with their performances. On this joyful occasion, the entire crew along with the cast gathered for a small cake-cutting along with some Punjabi music and dance making this event a memorable one.

Sharing his happiness Vipul Roy aka Aditya mentioned, “I am really glad about how far we have come together as a team. Partners is a show that has really evolved me both as an actor and individually. The response that the show and my character has received is overwhelming. It’s a great day for us for completing 100 episodes and I just feel all our hard work has paid off.

Speaking about the show and his success Kiku Sharda aka Manav mentioned,” I am feeling so happy and blessed that the show has completed 100 episodes. The show reflects our passion and our hard work. The success of the show is a great motivation for us as we are setting new benchmarks for ourselves and hope to deliver much more entertainment in the upcoming episodes.”

Patralekhaa Joins Rajkummar and Hansal Mehta for a Webseries!