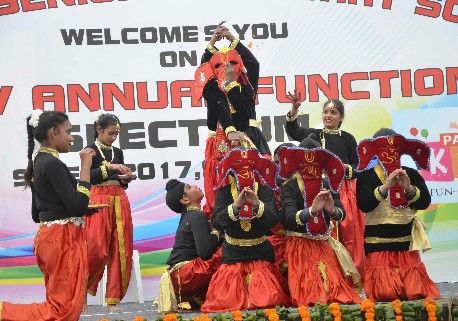 The Principal Mrs. Nirmala Sharma formally welcomed the eminent guests which was followed by prize distribution ceremony and the release of school magazine ‘SPECTRUM’ by the chief guest. Mr. Iqbal Singh Shergill, Director proposed vote of thanks and said annual show is an event to showcase the talents of the children for witnessing and appreciation of the parents.

The event took off with orchestra where students played a fusion of classical instruments reviving its fading glory and budding music talents played melodious numbers on the keyboard.

The dances presented by the pre-primary wing ‘Paragon Kids’ took the audience on a spectacular journey showcasing transformation of human minds through education. An English play, ‘The Dear Departed’ and German play ‘DiesibenRaben’ were an exclusive presentation.

The scintillating performances of the students on various songs, ‘Malhari’, ‘O Ri Chirayia’, ‘AIN’T Your Mama’, ‘Galti se Mistake’ etc left the audience spellbound. The show concluded with energetic Bhangra and Giddha presented by the students of the senior wing.  The chief guest Mr. Sharanjit Singh lauded the efforts of the school students and staff for an enthralling show.