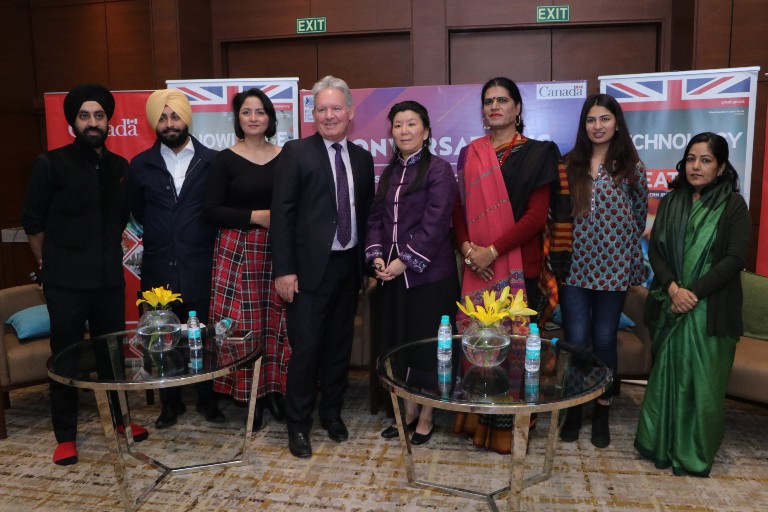 A discussion focused on making online spaces safe for women was organized today in Chandigarh by the British High Commission and the Canadian Consul General ahead of the International Women’s Day.

The event, Conversations, held at Hyatt Regency saw an invigorating discussion by prominent women and civil society members who shared their personal experiences about facing harassment and abuse on social media platforms.

The discussion looked at the growing use of the internet in India and explored the repercussions of this access on women and other marginalized groups, who often face violence and abuse online – a significant barrier to the free expression of their views on social media.

“While men can also be victims of online abuse, women are often overly targeted, especially when political opinions are expressed. It’s high time we took more seriously online abuse of women. We must ensure that women can express themselves without fear online. We need safe spaces for women to talk about their abuse,” Said the distinguished social activist Sanam Sutirath Wazir, who was one of the speakers at the event.

Talking about the issue of the rights of women and girls, Andrew Ayre, British Deputy High Commissionersaid that the British Government is a strong advocate of human rights and has instigated many programmes to promote gender equality. Clearly there remains much to do but working with Indian partners will continue to improve lives, particularly of those less fortunate than ourselves.

Consul-General of Canada in Chandigarh, Ms Mia Yen, said: “Canada believes in the promotion and protection of the rights of all women and girls to access digital technology without being targeted by online violence and abuse. Today’s event is a great opportunity to discuss ways to make the Internet a safe space for women. I encourage everyone to join the movement to end online gender-based violence.”

Sharing her personal experience about facing online violence, Social Activist and Author Gurmehar Kaur said, “When I posted my picture online earlier in 2017, I knew there may be backlash, but I did not expect it to be of this size. I had two choices before me, either let the online violence silence me, or use the platform to amplify my cause. I chose the latter’