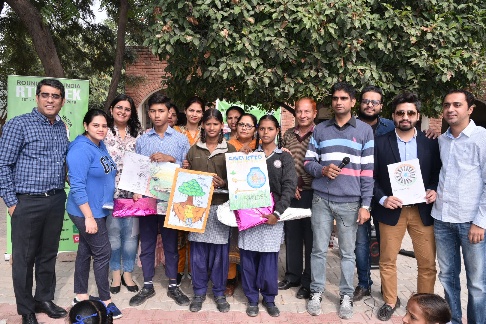 A painting competition at Sector 21 Government Middle school marked the NGO Round Table India Week here today. The competition was a part of several other community service activities which were a part of the week-long events.

A session on Good Touch, Bad Touch was attended by over 150 students of the school. The session was conducted for children aged between 10 to 12 years which was conducted by professional trainers from Prasanchetas Foundation.

Over 400 students participated in the painting competition held in different schools of Panchkula, Baddi, Zirakpur, and Mandi Gobindgarh and sweets were distributed on the occasion.

The local chapter of Round Table India (RTI) as a part of its week-long celebrations also distributed food at Pingalwara in Palsora, Sector 55 to 102 critically ill patients and staff there. Over 500 tree saplings were planted in Siswan forest range early this week and a blood donation camp was held in Industrial Area, Panchkula last week in which 69 units of blood were collected.

Round table India is an NGO consisting of young non-political people between the ages of 30-40 years trying to make a difference in society. These members put a lot of efforts to uplift society by providing education to the underprivileged. Round table India under its Freedom through education program has built over 6623 classrooms in 2849 schools impacting 7.28 million children.