Home Pollywood New talent needs a right platform to grow: Harjit Harman
Share on Facebook
Tweet on Twitter
Chandigarh
24 April 2014
DIVYA AZAD
There is no dearth of talent in our country, but the need to be that talent on the right track and in the right hands said Punjabi Singer Harjit Harman on monday. Ireland-based music production company brings such opportunity for the youth of Punjab. The task begins with the launch of our new posters of Punjabi songs by the company. A press meet was held in Chandigarh on Monday in the august presence of CEO of Leinster Productions Jagjeet Singh Kahlon (in Ireland), General manager Jas Boparai,Manager Gurwinder Dalam, Director Manish Sadana (in Ireland), Marshal  from Bull18 network (digital partner), acclaimed Punjabi singer Harjeet Harman, Pretty Bhullar (fame chandigarh Police), Anmol preet (fame Sahan warge yaar) and Sandy Sandhu (winner of Awaaz Punjab di)  at Hotel JW Marriott, Sector 35. 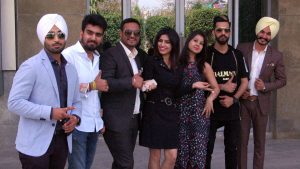 Also, another aim of the conference was to announce the first Punjabi feature film by the company for which all the fresh talent has been invited. The organisers also assured that anybody who joins them will be in safe hands and their potential will be utilised to the fullest.

Mr. Jagjeet Singh Kahlon From Ireland shared, “I feel that our youth tremendous talent, but their potential is not utilized rightly and hence they don’t get their deserved space. As a result they get disappear from the industry. We are new but emerging as a strong company. I also wanted to become a singer, but due to lack of resources I couldn’t follow my dreams, but I don’t want these things happened with other aspirants”.

“So, the idea is to give them the right platform where they can prove their potential. This is the way they will have their niche in the industry and among the audiences,” added Jagjeet. Director Manish also sent his good wishes to the young talent of Punjab through message.

Company is also involved in punjabi music shows worldwide. Our own Kulwinder Billa is going to Ireland to do a live show on 1st of May.

‘Khido Khundi’ will be a tribute to Hockey & it’s  Nursery...