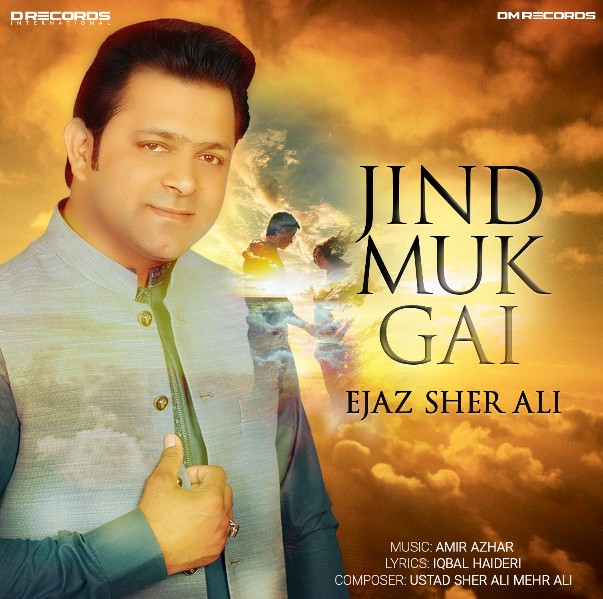 Jind Muk Gai is Composed by the legendary qawwali maestro of International fame Ustad Sher Ali Mehr Ali Khan Sahab. Lyrics penned by the late Iqbal Haideri talk of the yearning  of a beloved. Traditionally a Qawwali, Jind Muk Gai has been  fused with western instruments to give it’s sufi flavor a brilliant love Ballad blend.
This song has been sung by
Ejaz Sher Ali Khan – singer and harmonium player who takes an innovative approach to qawwali while honouring the roots of its tradition. His father and uncle are the legendary qawwals Sher Ali Khan and Mehr Ali Khan, are considered cultural torchbearers of the legendary Nusrat Fateh Ali Khan.

From an early age, Ejaz Sher Ali accompanied them on worldwide tours as an apprentice qawwal. His own international debut concert, in 2016, was at Konya’s Mystic Music Festival. Currently Ejaz Sher Ali serves as lead vocalist of the band RocQawali, a group that fuses the sounds of Sufi music with Western indie rock-and-roll. Based in Denmark, RocQawali has released albums produced by famous artists such as Mark Howard, who worked with qawwali legend Nusrat Fateh Ali Khan and iconic Western artists such as Bob Dylan, Joni Mitchell, and U2. RocQawaali was nominated for the Danish Music Award in 2013 and 2015. The band has also performed at major jazz festivals, universities, clubs, and on television, has given tours in Pakistan, Russia, and has performed for and taught. In addition to his work as a member of RocQawali, Khan has released several solo videos and songs and He also teaches music to underprivileged students.

The classical flavor showcased in the song by Ejaz SHer Ali, shines through  his intricate and soulful singing.

The Melody of the song especially the verse Chheti Aa Sajna, Gal La Sajna, engulfs the listener and the song grows on you.

A song for your walks, long drive, reminiscing Silent moments with oneself. It is a must hear.

‘Money Aujla’s’ new song ‘Lecture 2’ will take the Audience by...