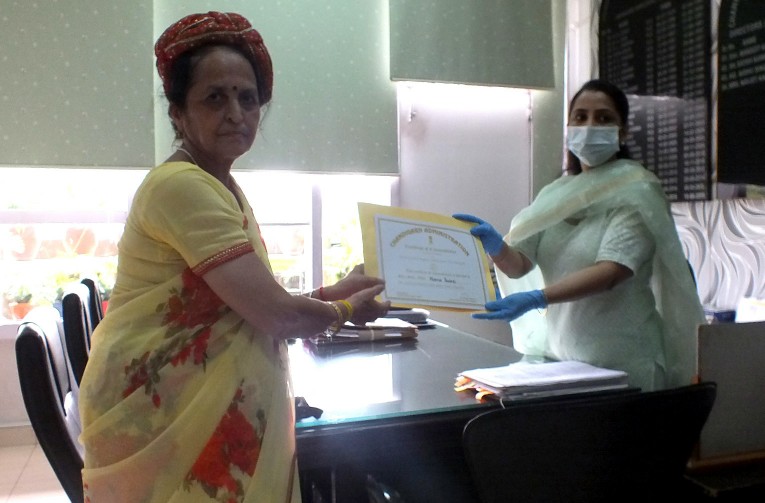 Neena Tewari, who is a prominent social worker of Chandigarh and chairperson of Nari Jagriti Manch was awarded by the UT Administration for her social work during COVID pandemic as one of the Corona Warriors.

It is worth noting that Neena Tewari has been awarded the title of a talented social worker by the Municipal Corporation, Chandigarh and Chandigarh Traffic Police, appreciating social work.
On this occasion, Neena Tewari said that she is very proud to receive this appreciation letter, and she said she will continue to do the good work. Besides helping people during the pandemic, Tewari also played a vital role in spreading awareness among people.
She informed that initially on March 7, her NGO distributed face masks and soaps at Sector 17 Plaza and made the residents aware of this epidemic. Later her NGO also distributed 2000 face masks, 2000 pure water bottles for drinking, 2000 biscuits, 2000 juice packets in the local bus stand to 2000 migrant passengers in the crisis of migrant laborers.
The city’s sweepers were felicitated as the Corona warriors by showering them with flowers and giving them suits, face masks, juices, biscuits. Tewari said that due to the pandemic, she through her NGO distributed around 1 lakh face masks, sanitizers to the residents of the Colony in Sector 25, Sector 40, Dadumajra Colony and other places in the city.
Tewari that the face masks distributed were prepared in the house and are still being prepared. Apart from this, in the time of this crisis, her NGO distributed 500 packets of food per day to the needy people for one month.