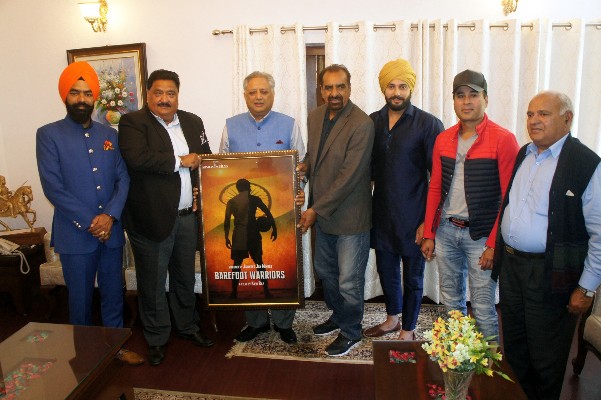 “There is an utter need to portray unsung heroes of Punjab like Banda Singh Bahadar on screen worldwide so that diaspora across the world kept motivated” desired Rana KP Singh, Speaker of Punjab Vidhan Sabha while having a gesture meeting with the crew of Indo-American venture ‘Barefoot Warriors’ which is all set for leaving for US after their month long shoot in Punjab. Citing the example of Battle of Saragarhi, Singh said, this historical episode is now the ‘case study’ in America and many European nations and always held Punjabi to a greater level. Present on the occasion Producer Jatiner Minhas and Director Kaviraj agreed to speaker’s viewpoint and said great stalwart like Banda Singh Bahadar and Hari Singh Nalwa has been totally neglected by the society and history, hence they too, are keen to make them as subject in their upcoming ventures.

‘Barefoot Warrior’ is true story based on the Indian national football team which gave a tough fight to France in 1948 Olympics but rejected by FIFA, football govering body to participate in 1952 World Cup because Indian players used to play football barefooted. “Currently India ranked 102 in the FIFA ranking. This inspiring film not only encourage young footballer but also give a new dimension to Punjabi youth for staying fit.” Said Minhas.