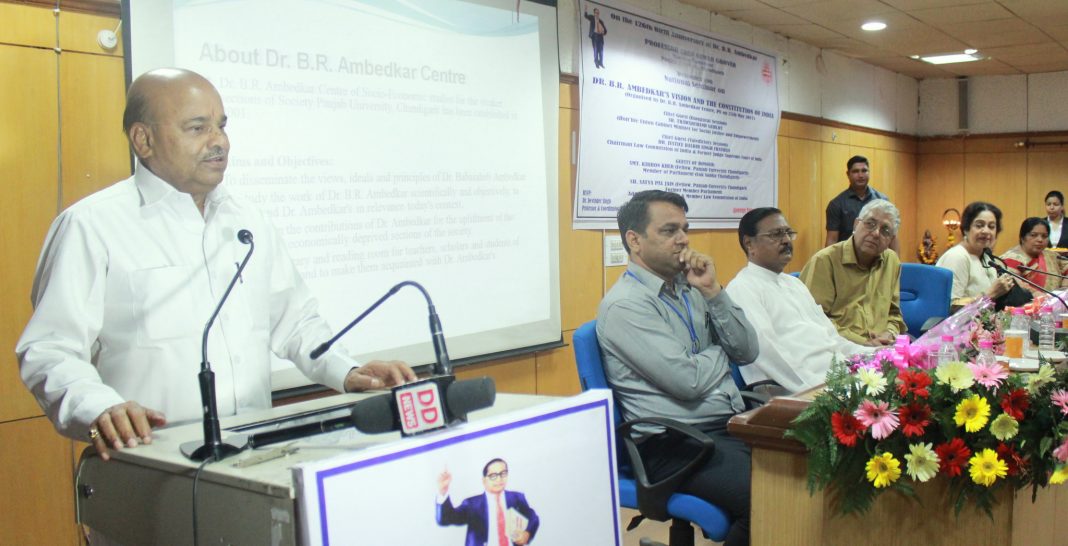 Adhering to the wisdom of Dr. B.R. Ambedkar  that ‘an idea needs propagation as much as plant needs watering’, Dr. B.R. Ambedkar Centre, Panjab University Chandigarh,organized one day National Seminar on “Dr. B.R. Ambedkar’s Vision and the Constitution of India” on May 25, 2017.  The distinguished Chief Guests, Sh. Thawarchand Gehlot Union Minister of Social Justice and Empowerment,),  Dr. Justice Balbir Singh, Chairman, Law Commission of India, Smt. Kirron Kher , MP, Sh. Satya Pal Jain,Addl. Solicitor General & Member, Law Commission of India and other eminent scholars and personalities across north India graced the proceedings of the seminar.
Shri. Thawarchand Gehlot highlighted Dr. Ambedkar as the maker of modern India and praised the great personality for tirelessly working towards strengthening of India as a country. He reminded the audience that Dr. Ambedkar continued working towards social equality and freedom of mind throughout his life at the cost of his health and life. The Hon’ble minister further pointed out that it is unfortunate that many modern political parties celebrate wisdom of Dr. Ambedkar but failed to implement his ideal of Uniform Civil Law and abrogation of Article 370. He felt proud of being a part of the government which is working toward preserving the legacy of Dr. Ambedkar and decided to convert important places linked to Baba Saheb’s life as Paanch tirtha (Five Sacred Places). The government established various Study Centres in universities towards study of Dr. Ambedkar contribution towards social justice and empowerment.

Dr. Justice Balbir Singh Chauhan, Chairman Law Commission of India and former Judge Supreme Court of India, was the Chief Guest in the valedictory session and he highlighted the role of Dr. B.R. Ambedkar vision in the making of Indian Constitution and its importance in the present times. He highlighted about Dr. Ambedkar’s vision in progressing together irrespective of caste and religion. He dwelled in details about the vision of Dr. Ambedkar with respect to status of women in society/Uniform Civil Code and Family Law/Inheritance. He also made mention of Law of Magna Carta which is the foundation stone of all rights for women.

Smt. Kirron Kher highlighted various contributions of Dr. Ambedkar as a champion of social justice and gender equality. She felt distressed when women in India continued to face discrimination on the basis of religious dogmas. She also congratulated the present government for proposing National Commission for Socially and Educationally Backward Classes (NSEBC) as constitutional body to ensure
empowerment of the weaker sections.

Earlier, in the inaugural session while welcoming the guests, Prof. Arun Kumar Grover, Hon’ble Vice Chancellor, Panjab University, lauded the Ambedkar centre for initiating such academic ventures and hoped the same may be made an annual academic affair. He also highlighted the fact that the relevance of Dr B.R. Ambedkar has grown manifold not only in India but throughout the world.
Prof. Bhajan Kaur introduced the theme of the seminar and discussed the main thrust of Dr Ambedkar’s  philosophy aiming at liberty, equality and fraternity both as member of the Constituent Assembly and the President of Drafting Committee.
Sh. Satya Pal Jain, a senior advocate and member, Law Commission of India praised Dr. Ambedkar for his herculean efforts to ensure social justice and further pointed out that the observations of Dr. Ambedkar in various discussions of the Constituent Assembly are studied by eminent Jurists to settle various legal points.    He  appreciated the efforts of Dr. B.R.Ambedkar Centre in conducting such a successful event. He commemorated the role played by Baba Saheb, the man responsible for the making of largest Constitution in the world.
There were four technical sessions in which over 120 researchers presented their papers highlighting the contribution of Dr. Ambedkar in framing Indian Constitution and Parliamentary Form of Democracy. The seminar was attended by the academicians, research scholars, students,
advocates and other prominent personalities.