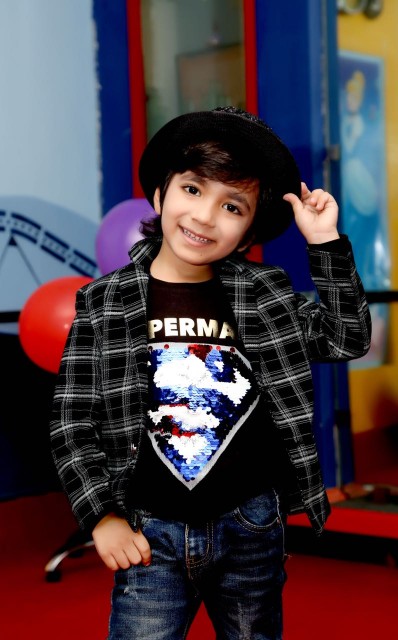 Five-year-old Vihaan Chaudhary of Gurukul School, Sec 20 here, has been awarded the title of ‘Youngest Trendsetter’ competing against children at a National level. Organised by Talent Groomers under the guidance of social worker- Neeru Sehgal , Vihaan received the award from Mrs India International 2017- Neetu Prabhakar, at the National Capital New Delhi.

“I would like to thank the Principal of Gurukul School, Panchkula – Harsimran Kaur and Director- Rajni Thareja, & the entire team at the School, without whose support & encouragement, my child would not have achieved this much.” Said Shivani Chaudhary, Vihaan’s Mother.

Vihaan bagged the award on account of his strong profile- the criteria taken into consideration while giving away the prize. It is noteworthy that Vihaan has an experience of  sixty ramp walks and of being awarded with forty modelling titles. He has already been signed up for many upcoming projects and has done numerous brand shoots. He has also been seen in many Punjabi albums with famous singers like Preet Harpal.

Vihaan said, “I enjoy modelling and walking the ramp. I am really excited at being given this award, I am very happy.”

The award ceremony in which Vihaan was awarded was held  at Technia Auditorium, Rohini, New Delhi & was graced with the presence of many Delhi police officers, beautiful and glamorous divas as well as fashion designers. It was a moment of pride for Vihaan’s mother – Shivani Chaudhary also because she was given the  title of best supporting mother.

In addition to modelling, the talented kid is equally good in academics. All this is the result of his mother’s regular support who had been accompanying Vihaan in all the shoots, making a balance between his academics as well as modelling career. She considers it as a dream seen by Vihaan’s father and being fulfilled by her.