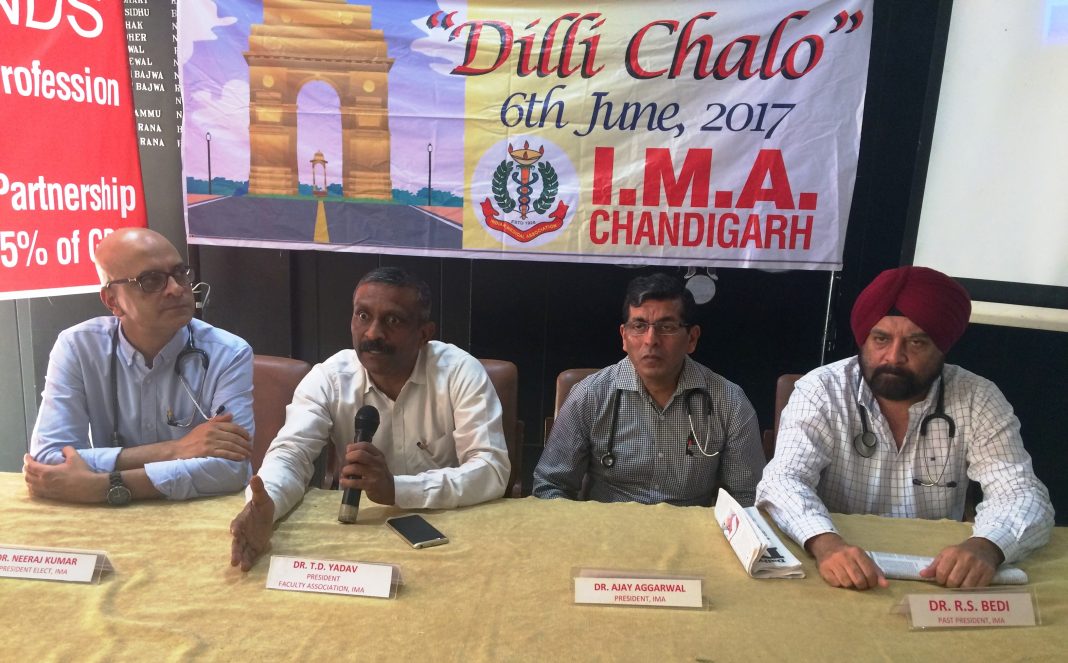 In order to put pressure on Government for early resolution of a number of issues being faced by medical professionals, Indian Medical Association has given a call to it’s 2.6 lakh members all over the country to observe strike on Tuesday, 6thJune and gather at Rajghat, Delhi for a ‘Dilli Chalo – IMA March’

In a press conference organized today in Chandigarh, Dr. Ajay Aggarwal, President, IMA Chandigarh chapter announced that doctors and hospitals of Chandigarh, along with Mohali and Panchkula will observe Half day bandh till 2 PM on 6th June. They will gather at IMA Complex, Sector 35, Chandigarh and hold a satyagraha to press their demands. However Emergency services will be exempted from strike. In addition, more than 100 doctors of this region will join around 5000 doctors at Rajghat, Delhi where a massive peaceful rally will be taken out and memorandum of demands and various issues being faced by medical professionals will be submitted to Ministry of Health and Family Welfare.

“Incidence of violence and injustice against doctors are increasing at alarming rate, the pleas of individual doctors fall on deaf ears and authorities and police shy away from taking any stringent action. The ‘Prevention of Violence against Medical Personnel and Establishment Act, 2009’ has been implemented in almost 19 states, but very convictions have been done in last 6 – 7 years.”

Dr. Neeraj Kumar demanded that a more stringent Central Act under IPC is required to act as a deterrent against these mindless violence.

Criminal Prosecution and arrest of doctors under sections 304 and 304A on patients’ complains of medical negligence has become order of the day. Doctors are also being prosecuted for minor procedural lapses like incomplete forms, not wearing name plate or apron etc. This is despite repeated rulings by Supreme Court that doctors should be criminally prosecuted in rare of rare cases where a gross negligence has been proved by a competent medial board. Giving figures, Dr Kumar told that more than 70 doctors have been prosecuted in Punjab alone in last 4 years. Police and other authorities should be sensitised about this and strict action taken in case of non compliance.

Talking about another very important issue, Dr R. S. Bedi, former President, IMA Chandigarh asked the Government to put a cap on compensation being awarded against doctors and hospitals under Consumer Protection Act. He gave example of AMRI Hospital, Kolkata which has been asked to pay more than Rupees Eleven Crores to a patient for medical negligence. Dr Bedi stressed that there is a cap on compensation under a number of acts and policies – Road Accident victim – Rs 15 lakh, Rail accident victim Rs 8 lakh, complications during tubectomy – Rs 2 lakh etc. The current formula of calculating compensation in cases of medical negligence is based on income of patient – the higher the income, more the compensation. This formula defies logic as it discriminates against poor – it encourages doctors to give better care to rich patients and ignore poor patients. Compensation underCPA should also be capped and not related to income level of patients.

Another issue bothering doctors is ‘Crosspathy’ – Allowing Ayurvedic doctors to practice and prescribe allopathic medicines as has been announced by Government of Maharashtra, Haryana and MP . Anyone with basic common sense can judge how risky this is – it is like playing with lives of patients. If Ayurvedic doctors are not trained in allopathic system of diagnosing diseases and prescribing medication, how can they give appropriate treatment. This is also against High Court Ruling and Medical Council of India Rules on this issue. This decision of government will also lead to effectively killing Ayurveda and Ayush systems because their doctors are not going to practice the system they are trained in.

Finally, Dr Neeraj Kumar also touched the hot topic of Generic Medicine Prescription to be made mandatory for doctors. He explained that doctors are in favour of cheap and effective medication, but government is handling the issue in a wrong way. It is the government who gives license to pharmaceutical companies to produce and market 2-3 different packages of same medicine at different prices. If Govt. decide on ‘one company, one drug, one price’ policy, there will be no confusion. If doctors are forced to write generic name, it will be the chemist who will decide which company’s drug he should give to the patient, depending on his profit margins: On  the centrary, responsibility for any side effects of drugs will lie on doctors.

In the end, summarizing the main issues, Dr. Yadav, President of Faculty Association of PGI,which is also supporting this agitation, said it is Government’s duty to provide primary and emergency care to it’s citizens which it has not been able to do because of grossly insufficient infrastructure. It is high time that government takes health of it’s citizens seriously and increase the budget allocation from a miserly 1% to 5% of GDP”.

All these issues of violence, criminal prosecution of doctors etc. are leading to a deep mistrust in public against doctors; and is discouraging bright students against opting for medical field as their career of choice. The repercussions of these will be visible in next few years – short fall of doctors, costly medical care, commercialization and corporatization of healthcare.

If Government does not act now, it will be too late;situation will go beyond control and there will be no scope of correction.