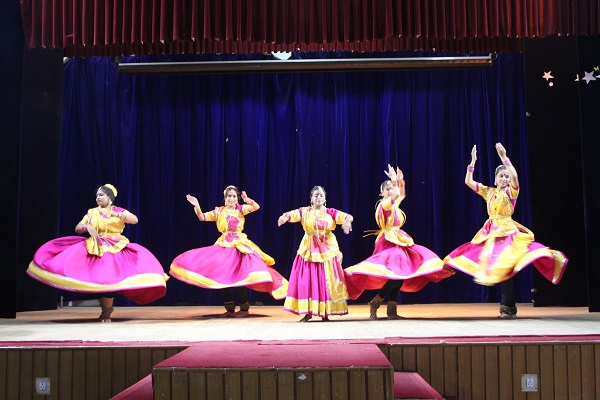 The Cultural Society of Post Graduate Government College for Girls, Sector-11, Chandigarh organised a Music and Dance Talent Search Contest for the students today. The contest was organized for the under-graduate and post-graduate students separately in two categories. There was an overwhelming response as more than three hundred students from the streams of Arts, Science, Computer Applications and Commerce appeared for the auditions conducted by Music and Dance Departments. Principal of the college, Prof. Anita Kaushal, was the chief guest on the occasion. Dr. Rama Arora, Dean of the college and faculty members of various departments were also present.
It was a spectacular show where students presented their skill and potential in various items like Geet, Gazal, Sufi, Folk Songs, Semi Classical, Film Songs and Folk Dances. The function was an outstanding blend of rich Indian cultural heritage and modern fusion. The presentations were applauded by one and all.
Classical dance performances by the students left the audience spellbound and performances on popular foot-tapping numbers had the audience swerving on their feet. The vocal music performances enchanted the audience as their renditions were folk as well as film songs.
Vice-Principal and Convenor of the Cultural Society, Mr. Kanwar Iqbal said that the selected students shall be representing the college in various competitions at university, state and national level.
Addressing the students Principal Prof. Anita Kaushal, motivated them that such contests showcase the talent of the students and also develop a sense of competition and promote over-all development. She encouraged them to carry on their pursuit for excellence to carve a niche for themselves in today’s competitive world.