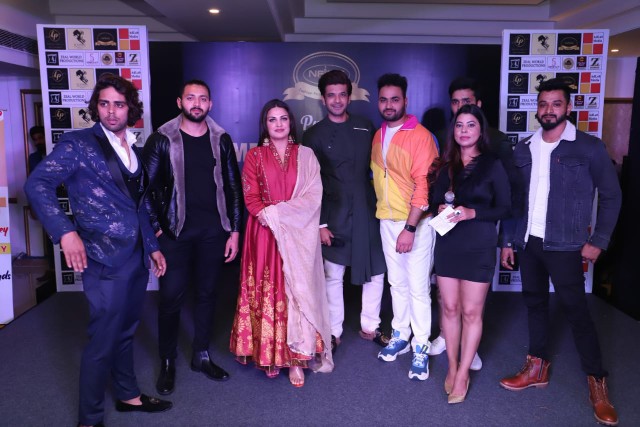 The 2nd semi-final of ‘Mr. and Miss India International Star 2020-21‘ was held at Zirakpur. The contest which is being organized by NFMG Production, was judged by the most sensational youth icon – MTV Roadies fame Karan Kundra, renowned  Punjabi film actress & a former Big Boss contestant Himanshi Khurana, and Director of NFMG Production Gaurav Rana.

Speaking on this occasion, Gaurav Rana, Director, NFMG Production said, “The main objective of the event is to provide a platform to the youngsters, where they can showcase their talent. We are keen on providing all necessary arenas to guide all models under renowned celebrities of B-Town. Under this objective, we had invited Himanshi Khurana and Karan Kundra. The grand finale is going to take place in New Delhi.”

The participants were screened through a ramp walk, a question & answer round, and a talent round.

While judging the contestants, Karan Kundra said, “All the participants were extremely talented and they showcased their skills quite professionally. The platform will provide a wonderful opportunity for all the contestants to display their skills. I take this opportunity to congratulate all the selected youngsters.”

Himanshi Khurana added, “It was a pleasure judging the contestants. It was nice to see upcoming models participating from the nook and corner of the country which included smaller towns and cities too. Unquestionably, youngsters from Tier-II and non-metro cities have great potential to reach new heights and such events could prove to be the launch pad for them.”

The celebrity judges congratulated the NFMG team for ideating & implementing the event. On the occasion Gaurav Rana expressed his thanks to his team especially to the  co-organiser Rajan Rana. He also complimented Ashish & Ayush Kumar for putting in all efforts to make the event a success. He added that the top 3 winners in the grand finale will get a whopping prize of Rs 2 lakhs and will also get the opportunity to work in coveted modeling and acting assignments.

It is noteworthy that Karan Kundra is an Indian film and television actor best known for the role of Arjun Punj in Ekta Kapoor’s Kitani Mohabbat Hai that aired on NDTV Imagine. He hosted three seasons of Kapoor’s crime show Gumrah: End of Innocence on Channel V. He was also a ‘Gang Leader’ in MTV Roadies X2 and X4. Himanshi Khurana is a model, actress and singer who works in Punjabi-language films. She appeared in the Punjabi movie Sadda Haq. In 2019, she participated in the reality show Bigg Boss 13 as a contestant.