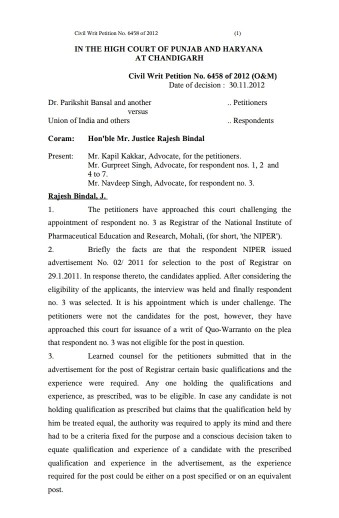 The ugly nexus of politicians and corrupt officials siphoning off funds in academic institutes, at cost of students and national progress has got exposed. Mr. Mansukh Lal Mandviya, the Minister of State for Chemicals and Fertilizers on 7-8-2018 tabled a false and misleading answer in the Lok Sabha to protect the Registrar, Mr. PJP Singh Warraich, booked by the CBI on criminal charges for siphoning off crores of funds meant for research and education at the premier institute- the National Institute of Pharmaceutical Education and Research (NIPER), Mohali. The institute founded in 1994 is known as the IIT of Pharma.

Responding to unstarred question number 3445 raised by Shiv Sena MP, Mr. Rahul Shewale whether the Director NIPER has revoked suspension of the NIPER Registrar, the Minister responded that NIPER Director has not implemented order of the BOG Chairman dated 14-6-2018 regarding revocation of suspension of Mr. PJP Singh Warraich. He also submitted that reasons for non-compliance were not submitted by Director and that the Director has been issued show cause notice by the Ministry.

The Minister failed to inform the Lok Sabha, that Mr. PJP Singh is already booked by the CBI on criminal charges relating to large scale misappropriation and bungling of funds meant for research and education of students and amount is running into several crores. He also did not inform that the suspension was carried out by the Director after CBI sought removal of the Registrar as he was interfering in investigations and creating fear in minds of witnesses. The Minister further failed to inform the correct position relating to Warraich on 7-8-2018 when the reply was tabled that on the said date, question of revocation of suspension of Warraich and taking him back on job was not possible, because the Punjab and Haryana High Court had already vacated the stay granted to him in a case where his appointment had been quashed in 2012 as being illegal. Based on the High Court Judgment, the NIPER Director had already relieved Warraich on 31-7-2018.

Thus two critical facts relating to Warraich were concealed from the Lok Sabha by the Minister- firstly that the suspension order had come in light of CBI orders to remove Warraich from the post to ensure free and fair investigations and prevent fear in minds of witnesses who were being threatened by Warraich and secondly question of revocation of suspension did not arise because Warraich had already lost the job as per decision of the Hon’ble Punjab and Haryana High Court.

It is relevant to mention here that CBI in 2016 had lodged FIR in 2016 against Warraich, two NIPER Directors and several unknown officials of the Ministry and investigations are at very critical stage. The director involvement of Minister has exposed the nexus.

Interestingly, the Ministry has remained deaf to the suffering of two top NIPER teachers – Dr. Parikshit Bansal and Dr. Neeraj Kumar who were victimized by removal from their jobs in 2013 and whose families are suffering for last more than 5 years. Two ex-defense employees, Captain Kshitij Sharma and Lt. Col. Sanjeev Taggar were also victimized and removed from their jobs in 2015 when they refused to toe the line of corruption at NIPER. However, Ministry took no action to help the whistleblowers and ensure justice to them. However, it jumped in to help a person booked by CBI on criminal charges.