Ritesh Goyal, a 20-year-young gun from Chandigarh, has not just made the city proud but the whole nation through his achievements and path of action. The journey from achieving 10 CGPA aggregate in his class 10th to getting top National Ranks in Formula Student racing(that too TWICE!) was no piece of cake. The milestones covered by him include various aspects like drama, arts, language, business, science, technology and designing. It’s Ritesh’s well-rounded characteristics helped him stand out. He says his motivation is to see ‘More’ as ‘Less’ and never settle down. Commencing from the school times, Delhi Public School, Chandigarh, he has been strong in his academia and played an active role in all kinds of co-curriculum activities. He is currently pursuing his 3rd year in Bachelors of technology in Mechanical Engineering from the prestigious Vellore Institute of technology, Chennai. Not only performing well in his academics and managing inter college events, he is also leading the team, VITC Formula Electric, of young automotive enthusiasts, working on the principle of green electric vehicles .With the vision of bringing latest technology to India, the team has designed and fabricated a fully electric formula-race car!

The team participated in Formula Green 2015,conducted by ISNEE at Kari Motor Speedway, Coimbatore, Tamil Nadu in February 2016 and was titled the National Champion, standing 1 st among many other competitors. With a new car, participated in FSAE-Australasia, held at Calder Park Raceway, Melbourne, Australia in December 2016, where the team sported a great performance being ranked 8th amongst all the electric vehicles present in the event. 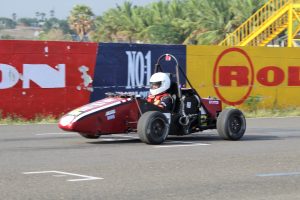 In March 2017, Formula Green, the team’s home turf, the efforts paid off again and earned the squad a National level podium finish and the silverware that followed in the form of 2nd runner-ups trophy, posing a tough albeit a healthy competition to the other teams in all the events, securing 2nd position in Business Logic Case, Dis-Asm and Acceleration; 3rd in Design and Manufacturing and 4th in Cost Report; and nerve-racking the competition with the performance. With all this experience in hand, he aims again at FSAE-Australasia in December 2017, proving the talents and brilliance internationally and making India proud! On inquiring, where he sees himself in future, he states, “After graduation I can perceive myself in an entrepreneurial position. I adore the art of business, and have a heart for technical work. I have been blessed with much, and I am ready to give back, in the small things and in insurmountable ways.”