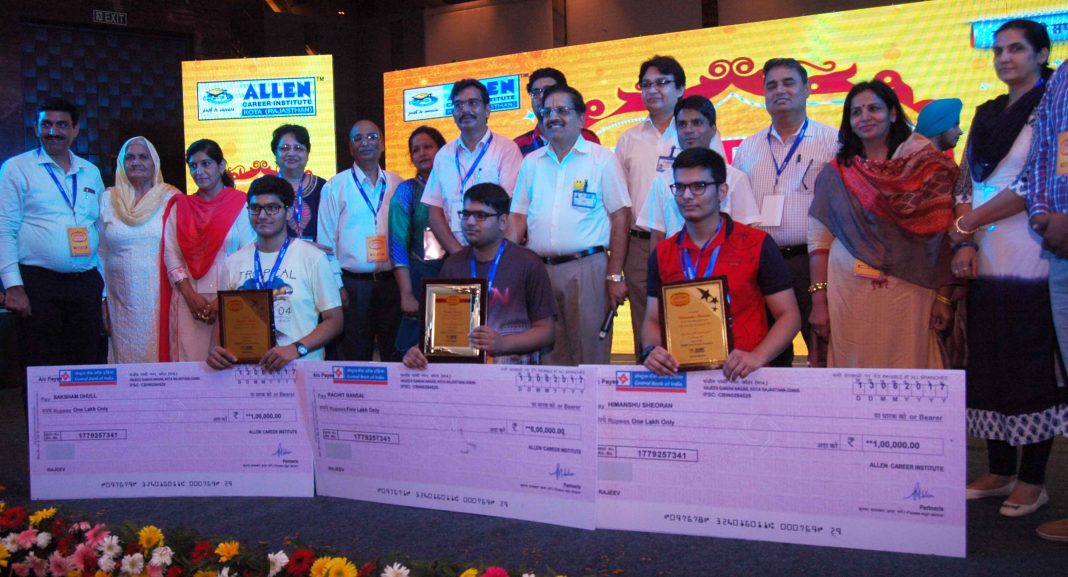 The programme was initiated with Deep prajwallan by our esteemed Director Mr. Naveen Maheshwari, Vice President Mr. Pankaj Birla who were escorted by Center Head of the Chandigarh branch Mr. Pushkar Rai.

The Centre Head of the Chandigarh division applauded his academic, administrative team as well as the students for turning the collective dream of seeing Allen at the top flourishing into reality. He was convinced about the fact that none could stop this diligent group’s efforts to achieve the aim of being the no. 1 institution of the region.

Approximately 98 students were awarded prizes which included the prize money of Rs 5 lac to Rachit Bansal (AIR-9) and Rs 1 lac each to Himanshu Sheoran (AIR-59) and Saksham Dhull (AIR -66) etc. of JEE- ADVANCED 2017.

Sh. Naveen Maheshwari, Director of ALLEN expressed his gratitude for the trust that the parents of the zone have placed in the institution since its establishment. He said that the motive of opening various branches was to familiarize students with the values inculcated in the pupils studying in Kota and today, on seeing the achievers he feels that the target has finally been achieved.

Sh Pankaj Birla, Vice President of ALLEN thanked the parents and students of Chandigarh for associating with ALLEN to form a team which could produce such good results of National fame.

Moving towards an end of the event a Mimickery Act, Dance on “ISHQ TERA TADPAVE” and Bhangra dance was performed by the topper studentsRachit Bansal, Himanshu Sheoran and Saksham.