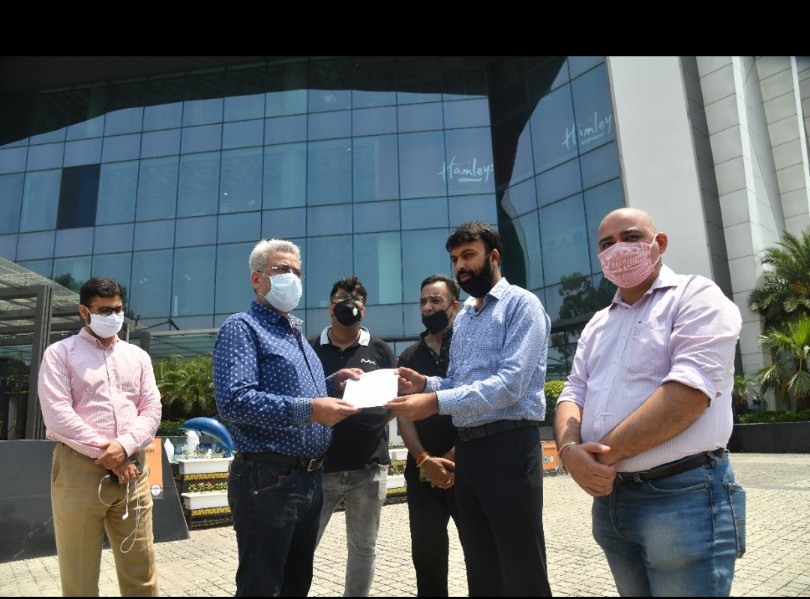 After recent standoff between India and China the whole country is United and intends to take steps to counter Chinese aggression. Realising this today Adv. Gaurav Goel, President Progressive Lawyer’s Forum launched the protest against Chines business expansion and handed over a memorandum to the Executive Director of Elante Mall, Mr Anil Malhotra requesting him not to promote and encourage Chinese product in two of the outlets which exclusively deal in Chinese products.

Gaurav Goel told him that all India traders association to who has joined hands and took a decision that favours the national interests that they would boycott Chinese products and would encourage others also to do away with Chinese products. He said that it is the time to show solidarity specially when Indian soldiers are laying down their lives on Indo China border to protect the Indian territory. He said that soldiers are protecting the country National interest bye bhai be there on the borders but we the citizens can also contribute to protect the country and work for National interests by boycotting everything that belongs to a country that uses the profits it earns from you to buy weapons and ultimately claims the lives of your soldiers.

Sammed Chaku also appreciated the decision taken by all India traders Association to boycott Chinese products and said that it shows that the whole country is United against any foreign opression and the whole country can work for the benefits of Indian interest. He further said that the amount of business that China earns from India is 50 Billion Dollars and the profits are going to be used against India then we better should stop enabling them earn these profits.

He further explained that boycotting Chinese products may bring temporary earning of lesser profits but it certainly will benefit the country in the long term and it will also open up new avenues to manufacture things in India and the local manufacturing units will start flourishing. And by boycotting Chinese products Indian citizens can also send a message to China that the whole India is United against Chinese oppression at the Indo-sina borders and this way the Indians can pay their homage to the martyred soldiers. While handing over this memorandum Mr Sameer Chaku, Mr Sunil Bansal and Mr Yogesh Goyal were also present.