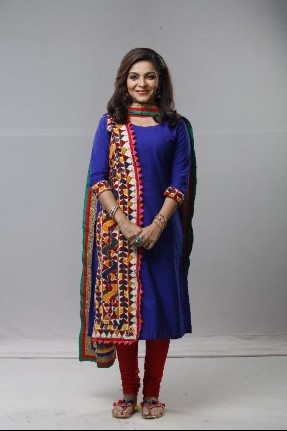 The talented and versatile actress Ami Trivedi is coming back on Sony SAB with the upcoming show ‘Saat Phero Ki Hera Pherie’. She will play the role of Rupal Desai who loves to control her husband Parimal and enjoys to show-off. Rupal is a fickle minded woman and is not able to settle on one decision or business idea very much like her clothes. Even her close friends are not spared and she enjoys critiquing them. In a brief conversation with Ami Trivedi on her role.

2)      We have always seen you comedy shows any reasons just choosing comedy?

6)      Like Rupal how convincing are you in daily life? Any funny incident which you like to mention – when you convince someone to get your work done

8)      How is it working with the veteran actor like Shekhar ji and  Swati Ji?

Catch Ami Trivedi as Rupal on Sony SAB’s Saat Phero ki Hera Pherie from Monday to Friday at 9.30 pm only on Sony SAB!

Triyambak cause problems for Chopra’s in Sony SAB’s Sajjan Re Phir...