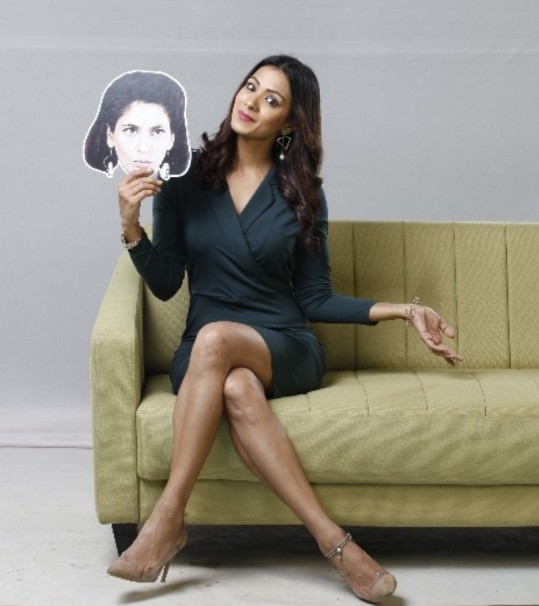 The gorgeous and versatile actor Barkha Bisht is back with Sony SAB’s comedy sitcom ‘Shrimaan Shrimati Phir Se’. Barkha Bisht will be seen playing the role of Doll (Prema Shalini). Prema Shalini a well-known heroine is a sweet, self- obsessed and a charming woman who believes in the phrase “Mei Apni Favourite hu”. Here’s a freewheeling chat with Barkha Bisht on her role:

1)How did you prepare for this role? Where there any challenges?

It wasn’t difficult to prepare for the role of Prema Shalini as Archana Puran Singh Ji has already raised the bar with her impeccable performance.  All I have done is watched the show back to back to get into the character. I didn’t want to try anything different since she has done it so perfectly. My personality will surely add to it but I would want to retain the character traits. My only preparation has been to watching Archana Ji and I am really excited to play her part.

2) How do you feel to be a part of the remake of the iconic show, Shrimaan Shrimati that has been so popular on Indian television in the 90s?

It’s a great honor to be a part of this show. It’s my all-time favorite comedy show and being a part of the original show feels really great.

3) You are known for portraying serious roles. Why did you accept this comic role?

There is always a first time for everything. I have been offered comic roles in the past but nothing as such interested me. The moment I was offered this role, I accepted it without a thought as it is a special role enacted by Archana Puran Singh Ji.  Since I am doing comedy for the first time, I really want to see myself in it and am excited to see the audience response to it.

The best feature of Prema Shalini is that she is a very sweetly obsessed with herself. She is an actor by profession and loves herself like no other. According to her, everything needs to be perfect right from her hair, make-up and her outfit. Prema Shalini is loyal to her profession and has a sweet husband whom she loves a lot but takes for granted too.

5) How is your equation with your co-stars?

My equation with my co- stars is just amazing. It’s the first time that I have worked with all of them and they have really helped me. They all have been associated with comedy and given some spectacular performances . They have been really supportive throughout. We all are already a family.

6) Who is your inspiration for Comedy?

I don’t think that I have any inspiration for comedy as I never thought that I will be working in this genre. Having said that, my co-stars have been a great inspiration for me as each of them have a distinct style and I get inspired seeing all of them daily.

7) Who is your favorite character from the previous Shrimaan Shrimati?

My favorite character from the previous show is Keshav Kulkarni.  He loves Prema Shalini and is so busy impressing her, pampering her and giving her a lot of importance and she also loves all the adulation she gets from him.

8) How is it working with Suresh Menon aka Dilruba, your onscreen husband?

I have known Suresh Menon since a very long time. This is the first time we are working together but we share a very good. He is a very calm, helpful and jovial so it is fun working with him. The amazing actor that he is helps me learn a lot. The funniest part about me and Suresh now is that whenever we meet each other at social occasions, we always address each other as Doll & Dilruba.

I do not have a particular memory but every day is a memory for me because while on the sets, I kept laughing all the time. Especially when we rehearse something, Suresh says something and after that I can’t stop laughing. It’s also the first time that I am on a comedy show and it’s all really fun for me. We are in character all the time.

10) How different is this remake of ‘Shrimaan Shrimati Phir Se’ from the previous one?

The show is completely the same as the previous one just the faces are the different. The show was so perfect that we kept the script, dialogue everything same.  So, shaklee badal gayi hai but andaaz wahi hai.

10)What can audiences look forward to in this show?

The audience can look forward to a lot of nostalgia. Our show is simple and funny and we are bringing back the original characters of Shrimaan Shrimati in our own styles.

11) With so much competition across TV, mobile and digital, how will this show ensure that it is entertains the audiences?

This show was a landmark cult classic in comedy in the 90’s.  It grabbed the audience   eyeballs and I am sure It will now as well. Competition has always been there everywhere and we are ready to face