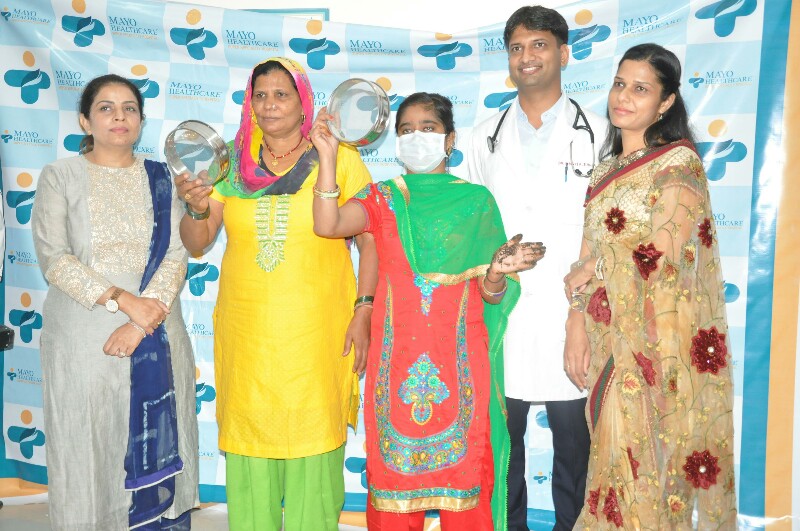 MayoHospital, Sec 69, organised a very different kind of Karwachauth Celebration. The same was held to felicitate & to provide an ‘opportunity to rejoice’ to women, who have either won the battle against Kidney disorders, or are under treatment for these. Present during the event were two torch bearers in the field of Kidney Donation – a Mother In Law & Daughter In Law duo from Karnal. In a one of a kind gesture the Mother In Law has donated  her Kidney to her Daughter In Law .Mr A K Sinha, Finance Secretary, Chandigarh(UT) was Chief Guest.

“Anju (27) has got a  new lease of life this Karwachauth, due to  her Mother In law – Mrs Bala Devi’s (55) initiative. We wanted to motivate people towards Kidney donation through this event. It is proved by this rare example that Kidney donation is perfectly safe & family members of Kidney patients need not be scared to donate Kidneys to needy relatives,” said Dr Manish Singla, a Kidney Transplant Specialist from Mayo Hospital, who is the only Kidney Specialist of Tri City holding a fellowship degree from Canada.

“Normally this kind of a donation is not witnessed often as the relation of a Mother In Law  & Daughter In law traditionally, has been quite formal. But Daughters’ In law are just like daughters who have been married into a new family and I feel all Mothers’ In Law should help out their daughers’ in law, if they are in need of Kidney transplants, the way I have done,” said Bala Devi.

The event received an emotional turn when Anju and her Mother In Law Mrs Bala Devi explained how the family whole heartedly supported Anju and it was decided that Anju’s Mother In Law will donate her kidney to Anju.

“My bonding with my Mother In Law has become even more strong  after her magnanimous gesture of donation of her Kidney to me. I appeal to all Mothers’ In Law & Daughters’ In Law to have a  relation which is not strained, but in fact like that of a Mother & Daughter. The team of doctors atMayo Hospital, helped me at every step, so that I was able to undergo a successful kidney transplant,” said Anju.

The Hospital management felicitated the duo. The hospital had also organised Games,Mehandi, Music competition etc with a theme of Karwachauth, for women Kidney patients.

A very pertinent session to advise women with kidney problems about precautions to be taken before the Karwa Chauth fast was also held. “It is very important for kidney patients to maintain water balance. Long periods of dehydration can have bad effect on Kidneys. One can start the day by drinking lots of fluids before sunrise (which is allowed in fast) which will keep the Kidneys hydrated during the day. It is very important for those who have pre existing kidney problems that they should seek opinion of a Kidney specialist before doing such type of fast,” explained Dr Singla.

Dr Manish Singla, informed the media that kidney failure has risen tremendously in last few years mainly due to incidence of diabetes and high blood pressure. He said that there are more than 3000 patients on dialysis in the region awaiting kidney transplant. It is noteworthy that Mayo Hospital is a 100 bedded Multi Speciality Hospital offering services in cardiology , nephrology, dialysis, Urology, kidney transplant, neurosurgery, psychiatry, drug deaddiction, Ortho,  gastroenterology, Critical Care and ICU. It has fully equipped ICU and  state-of-art modular operation theatres.

Fortis holds Session on “Hernia and its Management” for senior citizens