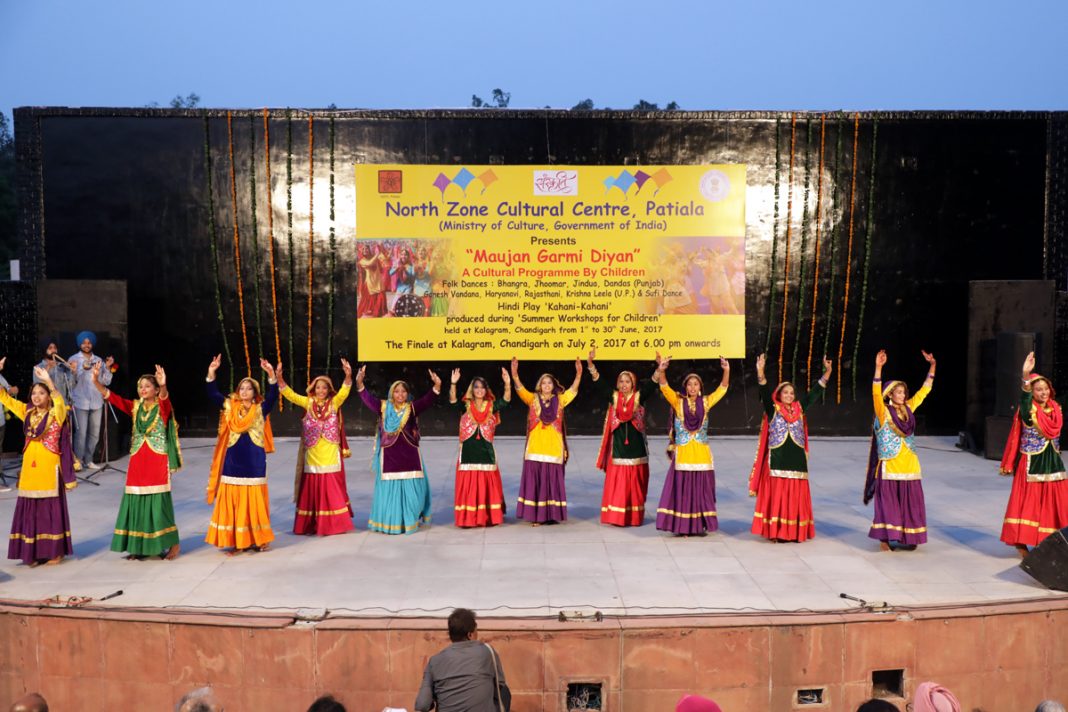 An impressive cultural program of folk dances of various states, titled ‘Maujan Garmi Diyan’ marked the grand finale to the one-month long summer workshop for children at Kalagram (Chandigarh) here today. The programme, which was organized by the North Zone Culture Centre (NZCC), Ministry of Culture, Government of India, Patiala, attracted as many as 350 children, including 200 girls, mostly from the slum areas of tri city. With their roots in Bihar, Uttar Pradesh (UP), Uttaranchal, Nepal, and other states, the young and upcoming enthusiasts evinced keen interest in the pulsating folk dances of Punjab, Haryana and other states.

The annual theme workshop, which kicked off on June 1, 2017, offered an opportunity to the children to learn and perform the prominent folk dances of Punjab, Haryana, Gujarat, Rajasthan, et al, under the expert guidance of trainers, including Barkha Bali and Neha Sahotra (Female section) and Parvesh Kumar, Jitendra Singh, Sukhwinder Singh (Male section) with ample experience in the respective fields.

The evening went to a devotional start with Ganesha bandna and the traditional lighting of the devotional lamp, which was followed by a surfeit of folk dances, one including Bhangra, jhoomer, Dandas and Jindua of Punjab, which the young artistes performed sporting their traditional costumes. Later, folk dances of Haryana, Rajasthan, Gujarat, and Chhatisgarh, were presented. A Sufi rendition by artistes was highly appreciated by the audience. A theme play ‘Kahani…Kahani…Kahani’, a social satire, was enacted with felicity. A special tabla presentation was given by the students learning tabla-playing at Kalagram under the aegis of NZCC.  Prominent among those who graced the occasion and shared stage included Harman Singh Sidhu (Social activist); Kamal Arora, Chairman, Chandigarh Sangeet Natak Academy; Sunita Nain, Dy Director, Education Department, Haryana, Baldev Kumar, SHO, Mauli Jagran (Chandigarh) and Ramesh K Dhiman (Columnist).

Programme Officer Yashwinder Sharma ‘Jassi’ said “The annual workshop offers an ocean of opportunities for the school children to make the best of their summer vacations. Under the banner, children learnt various folk dances (male/female category), theatre, et al. Given the unprecedented rush of participants, unlike the previous years, we are mulling over adding some more features to the annual festivity, from the next year so that no one returns disappointed”.  “Such theme workshops afford an opportunity to the likes of me, who want to spend their summer vacation by learning folk dances of various regions”, said Neha Sharma, one of the participants.