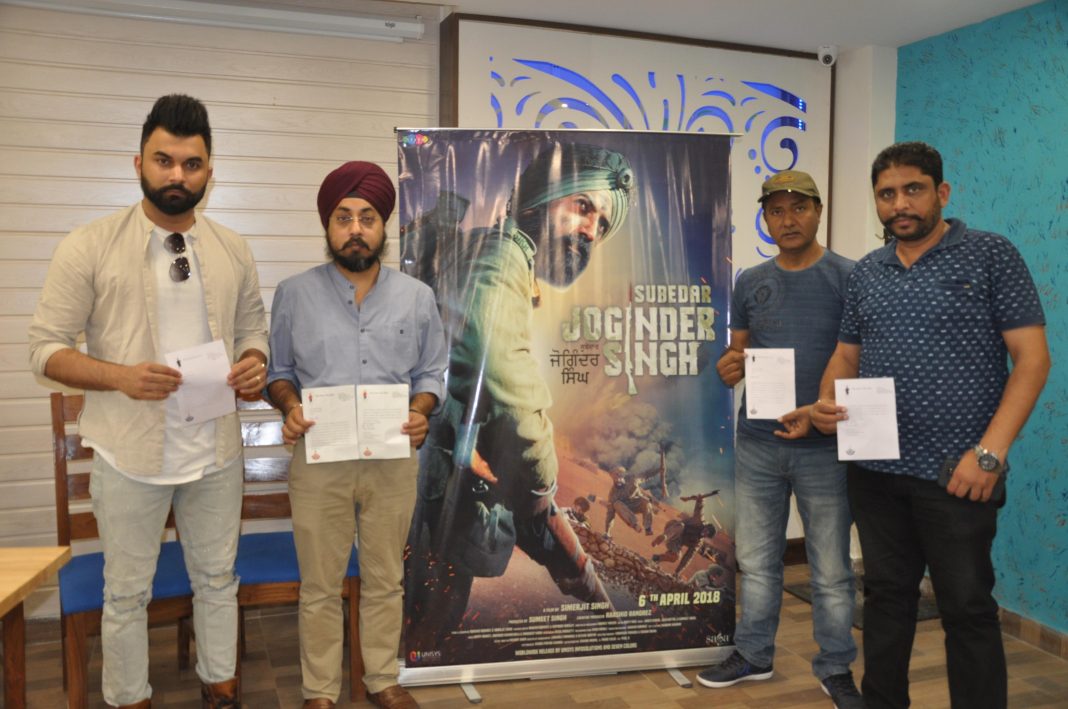 The release of the movie took a significant turn after Brigadier Indrajeet Singh Gakhal after watching the movie, made an appeal to the Punjab government on behalf of the Chandigarh Chapter of the Sikh regiment to make the movie-‘tax free.’ In words of the Brigadier, “The prime reason behind my appeal for tax exemption of movie is to ensure that the motivation and inspiration presented in the movie reaches wider cross section of the youth.” When asked about the prime focus on youth, he adds, “It will give youngsters a chance to know about the life of our military heroes and can encourage them to greater career prospects in the Army.”

The appeal has been well accepted and supported by the team of ‘Subedar Joginder Singh’ in the interest of the awareness about our saviours-the Indian Army soldiers. Sumeet Singh, Managing Director ,Unisys Infosolutions and Saga music while talking to the media, said, “Some movies are not just movies. They are epic works done by talented actors to present the history in its best form. I have personally watched the movie and got a feel of how our soldiers have been giving their today for our safer tomorrow and hence whole heartedly support Brigadier Indrajeet Singh Gakhal in his appreciable move.”

In the present scenario where makers only focus on the commercial aspects film-making; this film will prove to be a game-changer in the world of cinema. Apart from this, it would be considered as a motivation and a true portrayal of the life of soldiers about which majority of the society is ignorant.

The movie, which stars Gippy Garewal in the lead role, is a careful depiction of the journey of the brave warrior from when he was a common man to the legend he became after the 1962 war. It is noteworthy to see the transformation of the actor for his role which presents his dedication. The movie also stars other Punjabi singers like Kulwinder Billa, Rajvir Jwanda , Roshan Prince and Jordan Sandhu.

Legal action should be taken against gangsters based films, demands Sukhminderpal...