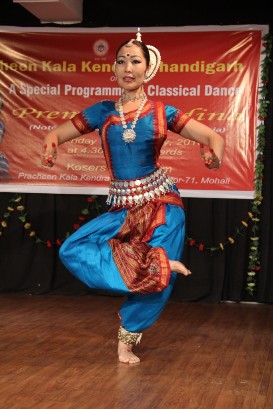 Premal Madina, an international dance artist, performer, teacher and choreographer with a burning passion for arts of all genres. She has been learning Odissi under the tutelage of Smt. Kavita Dwibedi for the last eleven years, six of which in New Delhi, India as the part of ICCR Scholarship Exchange Scheme programme. In the year of 2007 she performed Manch Pravesh. Blessed with natural grace and fluidity, she has undergone rigorous training in practical as well as the theory of Odissi dance. Along with her Guru, she has performed in various festivals such as National Youth Festival at Hyderabad, Dandi March celebration at Vadodra, Jaipur Virasat Festival at Jaipur, Orissa day Celebrations at Delhi, Durga Pooja Celebration at Delhi and at many international conferences all over India. Also she has performed as the solo artiste during Swami Haridas Sammelan at Vrindavan.

A graduate in Psychology she has tremendous attachment and high regards towards Indian culture in general and classical dance in particular. She is a devoted, dedicated and passionate person. She has also learned Kathak for 3 years from guru Tirah Ajmani from Shovana Narayan school and performed in Arpan festival in Habitat center at Delhi, annual day Asavari in Ashoka theatre at Delhi. She has given various performances in the Baltic States as well. Now she stays in Riga, Latvia and since 2010 has opened Nataraj Dance Academy and teaches Odissi dance at the University of Latvia. Every year starting 2010 she give a large concert for a project called “New Earth project”,

Madina commenced the recital with traditional Mangalacharn. She Started with Shiv Vandana with bols “Om namah Shivay” choreographed by her Guru Kavita Dwibedi followed by Pure Odissi dance , in this she showed her immense talent and knowledge of the rhythm and tal. Then she moved on to present Pallavi , a beautiful presentation based on raga Hansadhawani followed by abhinaya based presentation “yahi Madahva yahi Keshava” amidst applause. She concluded with Moksha a pure Nritta Item with crisp footwork and poses. Her fine footwork and Bhav, Abhinay, expressions captivate the audience. Kendra registrar Dr Shobha Koser , an eminent Kathak dance guru, honored the artist.