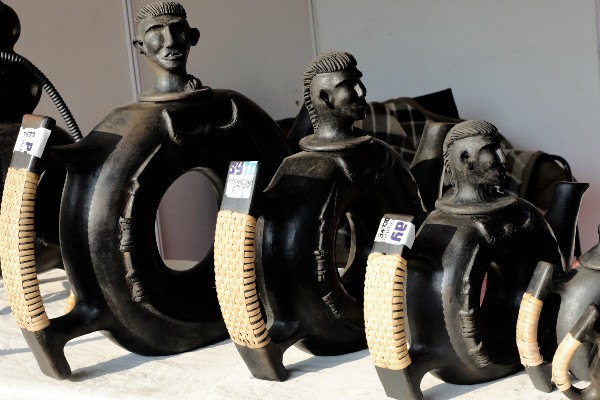 A kitchen cabinet in a house without all versions of pottery items is like a bride without bridal outfit/accessory. At the ongoing Aadi Mahotsav (Tribal Festival) at Kalagram, a brainchild of the Tribal Cooperative Marketing Development Federation of India (TRIFED), Ministry of Tribal Affairs, Government of India in collaboration with North Zone Cultural Centre, Ministry of Culture (NZCC), the Longpi pottery and black stone of Manipur has been attracting buyers in huge numbers.

In a chit chat, Wubgshungmi Shangrei, from Longpi Kajui Chingai village under Ukhrul district of Manipur, who has put up a stall here, shares that the Longpi and black stone pottery is a special kind of pottery that has its own grace and utility. This is specially sculpted out of special black stone found in Longpi village in Manipur only and at no other place in the state. As many as 30 per cent of the people of the village are engaged in this pottery trade, he informs.

Longpi pottery is closely associated with the social, cultural and spiritual life and ethos of the people of the state and that it derives its name from the village. A special feature of Longpi pottery is that it is not crafted on a potters wheel like other pottery versions being on display at various stalls at the festival venue here. Every individual pottery item is moved into shape the clay, manually, according to requirement, by the potter, Shangrei tells us.

Shangei tells us that the pottery items on display at the stall are getting good response from the choosey crockery lovers from all corners of the country. Like the royals taste for the pottery, the local buyers excited to buy black stone crockery was hot favourite with the lovers. He has items he has showcased include cup, balls, mugs of all shapes and sizes, pans, pots, kettle, hooka, wine containers, et al. He is satisfied with the sales. Crockery lovers are inspired by its arresting patterns, which are distinctive, earthy yet contemporary.

The significant role played by the TRIFED has given us a great support to project and promote the Longpi pottery by giving us space and wherewithal at various Festivals from time to time. We owe a special gratitude to the federation for the moral and fiscal support., he says

Roadies is back with Xtreme season, Gang leaders in Chandigarh for...