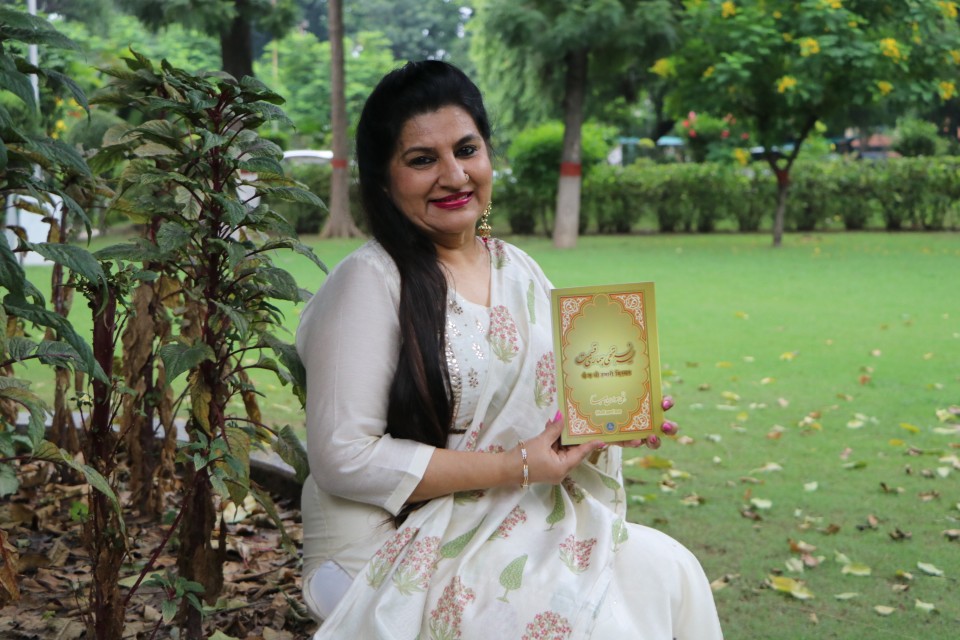 The chief guests modestly appreciated the bilingual book and congratulated Saba for this awe-inspiring accomplishment.

“Lily’s writing style is not only exceptional, but it is also a form of art in itself and her latest book, ‘Yeh Na Thi Hamari Qismat’ stands testament to the same,” shared Dr Patar.

Syncing with the same, Dr Misra firmly added, “I would like to congratulate Lily for entering the arena of Urdu ghazals. It is a really challenging task to do justice to the beauty of Urdu language and I am glad to see that Lily has aced this art with utmost perfection.”

“Lily hails her roots from the beautiful city of Chandigarh and in such a peaceful place, creativity is bound to flourish. Lily has gracefully carried forward the legacy of penning her words creatively and it is note-worthy to mention that her work has been translated into 18 languages,” Dr Trikha shared with a satisfied smile on his face.

Padma Shri Vishnu Pandya, Gujarat Sahitya Academy Chairman shared, “Lily has emerged as an iconic poetess who writes splendidly. Her love for Gurbani is soulful and she is certainly an epitome of a living miracle of poetry. I would like to express my heartfelt contentment and blessings to Lily for her new release.”

Professor Mohammad Zaman Azurdah, who has also authored the Foreword of this book added, “Lily’s ghazals have the sweetness of Punjab, the softness of the serene winds of Himachal, and the magic of Urdu language. She has an impressive skill of leaving an impact on the readers with just a few words. Her words and their meanings blend as smoothly as air and fragrance.”

While talking about her source of inspiration behind writing this book, Lily affirmed, “Ever since childhood, I have been really fond of listening to Urdu ghazals and shayari, and as I grew up, my admiration only grew fonder. During my school and college days, I took the plunge and participated in many Urdu poetry writing and recitation competitions, which helped me hone my expertise in this realm of art. As I grew up further, I had a chance meeting with eminent poet and author Faiz Ahmad Faiz, who left an indelible impact on me. Additionally, it was Sufi scholar, Syed Zia Alvi who played an instrumental role in encouraging me to write Urdu ghazals. Earlier my experience was limited to writing nazams, but it was only because of his constant motivation and appreciation that I decided to write Urdu ghazals and ever since then, there has been no turning back.”

“The title of my book ‘Yeh Na Thi Hamari Qismat’ seeks inspiration from one of the most celebrated ghazals by Mirza Ghalib ji, who has been my source of inspiration for all this while,” she further added.

‘Yeh Na Thi Hamari Qismat’ is Lily’s sixth book, while this is her first Urdu ghazals book that has been published in the Devanagari (Hindi) script as well. Her ghazals have earlier been sung by an array of mellifluous voices.

Lily is a renowned gold medalist from Government College for Girls, Chandigarh and has University Colours for Best Actress and Histrionics from Panjab University from where she completed her post-graduation in English. Lily has won many national and international accolades for her literary works.

The book has been published by Rhyvers Press. Speaking on the occasion, Director Rhyvers Press Mr Affan Yesvi said that the book of ghazals has shayari that reminds us of some of our most loved shayars of yore. He added that the book is a remarkable kaleidoscope of India’s rich culture, and represents the true essence of our Ganga Jamuna tehzeeb.

The book is available for purchase online as well as at select offline bookstores.