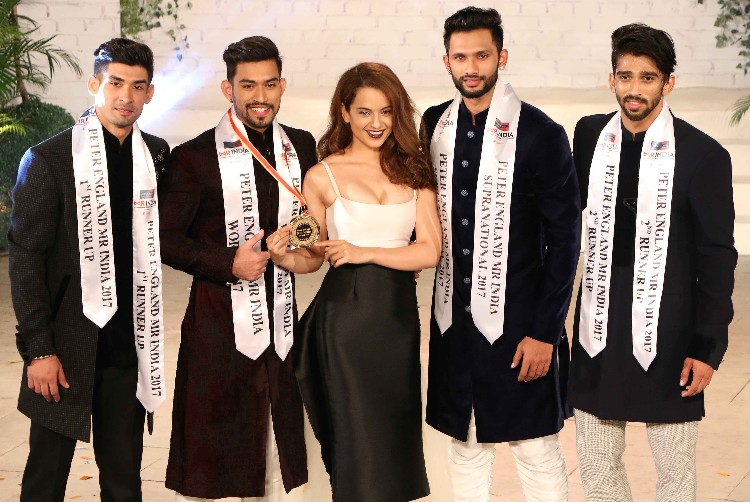 The most awaited moment is finally here. The prestigious male pageant of the year was concluded with none other than the beauty Queen Kangana Ranaut crowning of Jitesh Singh Deo as the winner of Peter England Mr India World 2017, Abhi Khajuria as Peter England Mr India 2017 – First Runner-Upand Pavan Rao as Peter England Mr India 2017 – Second Runner-Up, Prathamesh Maulingkar as Mr Supranational 2017 at the Bandra Fort in Mumbai. All the winners will be representing India at international pageants like Mr. World, Mister Supranational, etc. The night came to a stand-still when the winner’s name was announced marking an end to this beautiful journey of 16 handsome boys.

The finale night was a visual treat where the finalists were seen walking the ramp in wardrobe designed by ace designer Manish Malhotra, fashion director Nivedita Saboo and Peter England. There were amazing performances by couples Sonali – Sumanth and Akash – Pranjali which had the audiences cheering.

The contestants who had been vying for the coveted title underwent rigorous training, workshops under the mentorship and guidance of Mr. World 2017 Rohit Khandelwal quoted, “It has been a wonderful journey. All the boysare winners in their own right however there can be only one winner. The winner is very deserving and I would like to wish all the winners all the best. I am looking forward to the prestigious Mr. World pageant and hope that we bring the crown home again.”

The nationwide auditions commenced from November 7, 2017 and traversed through the length and breadth of the country to bring to you the best from cities like Chandigarh, Delhi, Chennai, Pune and Bangalore that culminated into the final leg of auditions at Mumbai where the 16 finalists were chosen. The 4 part webisode series was aired from 7th December, 2017 on the Zoom Facebook pagewww.facebook.com/zoomtv at 9 pm IST

Peter England is happy to associate with Mr India as their title sponsor. The brand has been one of the most preferred brands for the young Indian men, offering versatile fashion at an unmatched value.

Zeven with the brand philosophy of Live To Play has come on board as the co-powered by sponsor.

AR Mrs. India ‘SHE CAN, SHE WILL’ beauty pageant auditions receives...