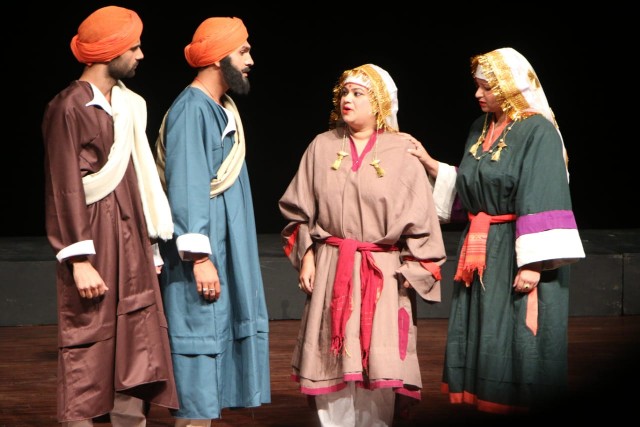 North Zone Cultural Centre (NZCC), Patiala (Ministry of Culture, Govt. of India) in collaboration with Chandigarh Sangeet Natak Akademi, Chandigarh is organising Jammu & Kashmir Theatre Festival 2018 at Tagore Theatre, Sector 18, Chandigarh from June 13 to 15, 2018. It is for the first time in the history of the country that a theatre festival dedicated entirely to one state is presented in other state.

On the second day of the festival, a Play ‘Ek Aur Birbal’ written by Rakesh Roshan Bhat and Directed by Rohit Bhat, Vemedh Rangmanch, Jammu was staged. The play is about Pandit Birbal Dhar who finds a passing mention in the history of Kashmir. He was a catalyst in integration of Jammu and Kashmir region into India through Sikhs in 1819 AD. Afghani Durrani clan had already been ruling Kashmir for about 6 decades when due to some turn of events Pandit Birbal Dhar decided to beseech Maharaja Ranjit Singh to come to the rescue of Kashmiri Pandits. It was not an easy decision to make. It required great vision, great will, great wisdom and great sacrifice. He had to have belief that he would be able to convince Maharaja to help him since Maharajas earlier attempt to enter Kashmir had been foiled by Azim Khan in 1812 AD. Azim Khan was the Afghani Governer of Kashmir at that time and Birbal was one of his tax collectors. Birbal also knew that his family and near ones would be slaughtered by ruthless Azim Khan once he would come to know of his exploits. He also left his son Raja Kak in Maharajas durbar as guarantee. Birbal Dhar was fortitude personified.

Kashmir has always held a great importance in this part of the world map because of its strategic trade routes, captivating natural beauty, rich flora and fauna and natural resources. Once the outside world got a whiff of this, invaders from North and North- West borders starting entering Kashmir. Mohd Ghaznavi failed in his attempt in 11th century but Mongolian invader Dalucha devastated Kashmir in 14th Century. Around 60,000 Kashmiri Pandits got killed then. It was around the same time that the Muslim rule started in Kashmir. Then for about five centuries the unabated persecution of Kashmiri Pandits continued in the valley. They were given 3 choices; to convert, to die or to flee. But Birbal Dhar did not succumb to any of those choices. He turned the tables on Afghanis instead and chose to fight with his wisdom and foresight. The successful capture of Kashmir by Sikhs under the guidance of Birbal Dhar ensured the inclusion of Kashmir region into Indian territory.

The play also highlights the fact that how the invasion of foreign mercenaries to spread Islam in Kashmir changed the socio-cultural landscape of Kashmir forever. Birbal was helped by local Kashmiri Muslims in his fight against the Afghan rulers. The play touches upon the 6 earlier migrations that pandits suffered in Kashmir and also there are references to Kota Rani. It is an eye opener and very educative for people who are not fully aware about the history of Kashmir.

The play Ek Aur Birbal is a tribute to this legend. The play traces the episode of why and how he got Maharaja Ranjit Singh to end the reign of terror in Kashmir. Ek Aur Birbal resurrects the Real Hero of Kashmiri Pandits.

Sh. Kamal Arora, Chairman, Chandigarh Sangeet Natak Akademi and the audience appreciated all the artists and Director of Vemedh Rangmanch, Jammu for this beautiful play presentation. NZCC, Patiala honoured all the artists with Certificates.

Prof. Saubhagya Vardhan has informed that the festival will conclude with the presentation of play ‘Final Solutions directed by Sh. Ravinder Sharma, Samooh Theatre, Jammu will be staged at Tagore Theatre, Chandigarh.

Wings Theatre Academy to perform ‘Death of a Salesman’