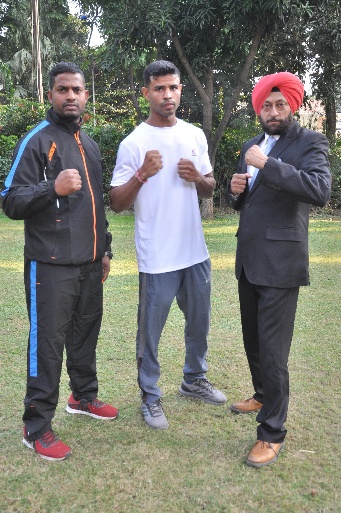 In the first-ever Professional Boxing match between India and Pakistan-Indian Army’s Suresh Kumar, Indian pro boxer and the title winner of 1st Indian Professional Boxing League is all set to take on his Pakistani contender Muhammad Bilal in the ring. Christened ‘The Fight to Unite’ the historic fight will be held on 29th February, 2020 at Auckland, New Zealand.

The details were announced by the Yadvinder Singh, CEO of Sports 13, who was accompanied by the boxer Suresh Kumar and his coach Jai Hind, during a press conference held at Press Club, Sector 27, here.

Gearing up for his upcoming bout against Muhammad Bilal, 26-year-old, Suresh Kumar, who is also serving in the Indian Army – Tradesman Mate (Ordnance) ensured to continue his winning streak. Suresh Kumar has a professional record of 3 wins and 0 losses in his pro boxing career

Suresh Kumar said, “I am excited for the fight against the Pakistani opponent, as its first time that the two countries are playing their first-ever professional boxing match with each other. I don’t have any such pressure of the game and I am fully prepared to defeat my opponent.”

He said, “My only game plan is to play my natural game in the ring. I will focus on my basics and stick to the strategies that I have prepared with my coaches. I have studied Bilal’s game, he is weak at the back foot and his footwork is not fast. Here I have an edge over him.”

While talking about the preparation, coach Jai Hind said that we have been working rigorously day and night on Suresh’s strengths and conditioning and am confident he will surprise the opponent in the ring.

“Suresh is a phenomenal player in the super-light division and has been consistently doing well in all in his past fights. Suresh has the advantage of height and reach compared to his opponent. Since the next bout is against Pakistan contender, the pressure is quite obvious, which will remain on both the opponents in the ring.” Jai Hind added.

Following the session, Yadvinder Singh, CEO, Sports -13 – a sports management company and the organisation which is managing Suresh Kumar said, “India has a lot of talent to create legends in the field of professional boxing. All we need is to create more platforms for the young talents, nourish them and bring more sponsors forward in this game. Sport 13 aims to hunt for young talent in different sports’ disciplines and nurture and train the youngsters.”

Summing up the interactive session Yadvinder said, “The fight will endeavour to give a chance to peace and the spirit of brotherhood between the two countries. This is why the bout has been named ‘The Fight To Unite’.”

It was revealed that Suresh will also face Iranian boxer Khashair Ghassemi on 15th December this year, the bout is to be held at Pattaya, Thailand.