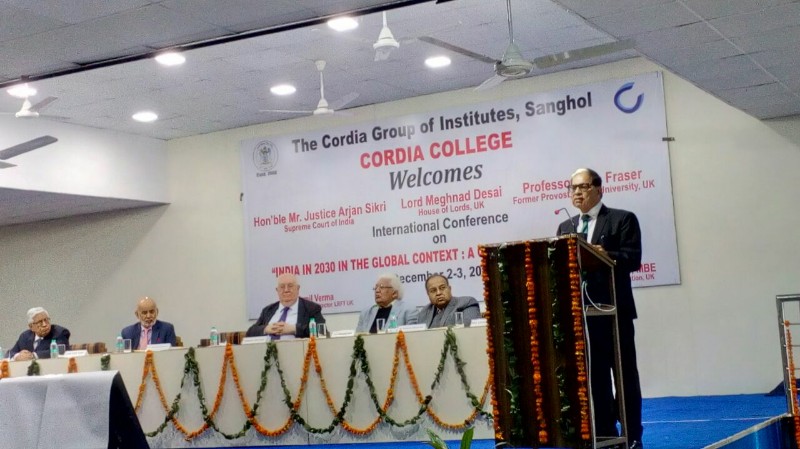 A two day international conference under the theme “India in 2030 in the Global Context: A Geo-political perspective” began at Cordia Group of Institutes here today. The conference was inaugurated by Mr. Justice Arjan Sikri, Supreme Court of India,  in the presence of Lord Meghnad Desai, Prof. Tom Fraser, Emeritus Professor & Provost Ulster University, UK, Mr. Subharata Bhattacharya, a known Journalist and Corporate,  Lord Diljit Rana, the Chairman of the Cordia Group of Institutes and Madam Urmil Verma, the Executive Trustee.

In his address Justice Sikri stressed upon to tackle social and political issues of India along with socio economic and political growth in the world. The entire world is looking at the younger generation of India, as over 50% population in India is below 25 years of age. A lot younger than Japan and China India’s economic growth is going at higher levels beyond economic growth we should think about social justice also.

Justice Sikri  referred to Swami Vivekanand ,  Amritya Sen and other economist who played important role in development of India. As for as the education scenario is concerned he said one or two decades ago education was in hands of state but with globalization and privatization a lot private education institutions have come up but more or less they are growing with their own selfish motives but the need of the hour is that education must grow up and face challenges of international standards and quality education must be available to everyone so that our youth can play an important role in economic growth of our country and entire world.

In his welcome address Lord Rana expressed that the scenario in India is changing rapidly and it would be near to be a super power up to year 2030. The biggest change is going to happen in agriculture sector. He welcomed Justice Sikri and all the other guests who grace the occasion with their presence.

Tom Fraser, Emeritus professor of Ulster University U.K. highlighted the rich history and culture of India. He expressed that other nations are learning from India about its progress.

Madam Urmil Verma, the Executive Trustee of the Institute read the annual report of the activities and programmes run by tha Cordia Institutes. She said that Cordia is narrowing the gap of the urban and the rural.

In the end the Campus Director Dr. B.D. Budhiraja expressed vote of thanks to all the guests and dignitaries present during the occasion.

Madam Isha Singal, SDM Khamano, many scholars, administrators and corporate of national and international fame were also present during the function. Many research scholars will present their research findings and possible directions to the society on what should be India of 2030 and what needs to be done.