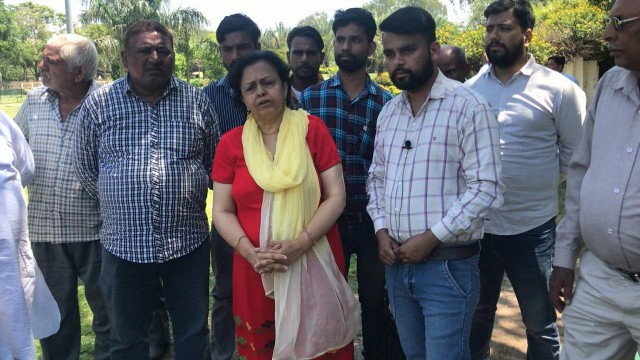 Chandigarh
19 April 2019
DIVYA AZAD
Dadumajra dumping ground issue is not new. The problem of dumping ground has been going on for several years. Residents of Dadumajra and passerbys are well aware of this serious problem prevailing from around 20 years now. No action has been taken by the government for this hazardous situation residents are facing.
Five days ago, Independent candidate from Chandigarh Lok Sabha seat Devi Sirohi talked to residents on serious problem of dumping ground whose video became viral on Facebook. After video went viral, Chandigarh Municipal Corporation and Administration has sought permission from the Election Commission for the approval of tender of 40 crores for dumping ground.
Devi Sirohi again visited Dadumajra today and talked to the residents. Hundreds of people got accumulated to thank Professor Devi Sirohi. Residents thanked Devi Sirohi and shouted slogans. They said that Government now remember our problem and have started taking it seriously after the visit by Devi Sirohi in Dadumajra.
Dadumajra residents said that it is merely a stunt by the BJP to woo voters in the electoral atmosphere. In the last 5 years no one has even given attention to our serious problem. We were suffering from skin diseases, shortness of breath, constant sickness of the children. Many people came here visiting, but no one took any concrete steps.
Devi Sirohi said that till now the eyes of the administration and the municipal corporation were closed. People also became patients of asthma, cancer etc. from the poisonous gases emanating from the dumping ground, but no one took any action. After our video went viral, a meeting was convened suddenly and EC has been requested to sanction the tender of 40 crores for dumping ground.