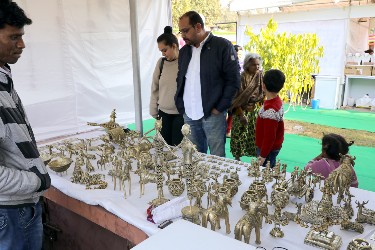 The ongoing Aadi Mohatsav (Tribal Festival) at Kalagram, Manimajra, here witnessed huge foot falls on the second day today. The festival has been jointly organized by Tribal Cooperative Marketing Development Federation of India (TRIFED), Ministry of Tribal Affairs, Government of India and North Zone Cultural Centre, Ministry of Culture (NZCC), Government of India. Lovers of tribal art and craft thronged the festival venue along with their families to be a part of the cultural extravaganza.

The great cultural mélange has brought as many as 70 tribal artistes and artisans from 25 tribal states of the country under one roof, who got an opportunity to showcase their talent. The festival, a brain child of TRIFED, is aimed at bettering the lot of tribals, who have remained stuck to their primal lifestyles for ages. It has indeed been doing a yeomans job by helping them by holding such theme festivals across the country.

The festival venue Kalagram turned out to be a mini India today with the people from various parts of the tricity and its neighbouring states of Punjab, Haryana and Himachal Pradesh, thronging in their thousands to witness the fascinating folk art and traditions of the tribal states of the country. They also seized an opportunity to interact with the start artists and craftsmen as also to buy ethnic handloom, handicraft, designers jewellery items, crockery and pottery items and lot more to choose from. Himachalis Kullu and Kinnauri caps, shawls, stols, mufflers, lois, jackets, heavily-embroidered socks, were hot favourite with choosey buyers. A range of organic dry fruits, including kagzi badaam, akhrot and other dry fruit item from the region were hot favorite with the choosy buyers. A variety of organic and medicated soaps to get rid of dandruff and treat dry skin were available on the other corner.

“This is the unique and charming feature of Indias unity-in-diversity, which is the soul of such theme festivals. I am going back to Delhi with a bagful of memories to share with my family and friends. The food court offering tribal savouries from various states of the country, where foodies had a date with their delectable delicacies.

The evening segment had artistes from Himachal Pradesh and Leh and Ladakh, who performed to an appreciative audience. They enjoyed the haunting tunes from the two tribal states for hours.

The evening programme was compered by Niharika.