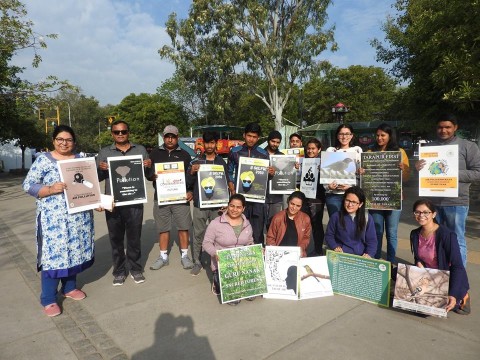 We the residents of Chandigarh very proudly share the pride of being the residents of city beautiful and so much boast about its well planned avenue plantation and lush green parks, while the irony is the the air quality of our city beautiful is almost as bad or even at times worst then may of the polluted cities of the country, inclusive of Delhi. Yes the figures are indeed alarming and vary according to location, such as the December AQI of Chandigarh as recorded from different areas was as poor as 247 in sector 17 and it was all the more damaging in the Chandigarh Industrial Area of being as high as 326. For which one of the prime reason is that the city has the highest density of vehicle registration with around 12 lakh registrations happening every year, which had further added to the burning of petroleum products and adding much higher levels of fossil fuel residue to the air.

Under such dreadly circumstances, a dire need has been felt to take up some serous measures to improve the quality of the poisonous air prevalent around. In lieu of the same a chandigarh based NGO, Prasanchetas Foundation in partnership with another NGO from Ludhiana, with the name of Ecosikh has now taken up this initiative to work upon the enhancement of the Air Quality in Chandigarh and throughout Punjab, under their project “Breathing Punjab”.

As per this project , maximum awareness and sensitivity will be spread to the masses about the degrading air quality of Chandigarh and Punjab along with information and ways to enhance the air quality. In lieu of the same, team Prasanchetas Foundation and it volunteers, to give a kick start to their project, reached at the Sukhna Lake on this sunday morning on 17 March and started educating the general public about their mission and even invited them for the next major event planned under mission “Breathing Punjab” where they will be coming one of the first manmade forest to be propagated under the famous Japanese Miyawaki Technique, which be executed under the expert of Mr. Shubhendu Sharma, Director- Afforest in the first week of April.

Thereafter, the team members and the volunteers of Prasanchetas Foundation walked down from the Sukhna Lake to Nagar Van, where all of them then sat down to work upon there further plan of action to identify maximum number of such sites where they wish to do the maximum plantation of oxygen bearing herbal, medicinal and many other native species of plants, which will enrich the quality of air in Chandigarh.