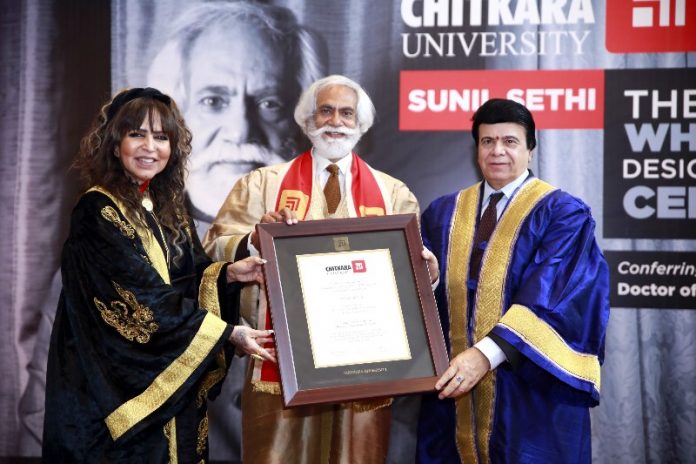 FDCI President Sunil Sethi, a stalwart in the ‘Indian Fashion’ industry, an entrepreneur extraordinaire, and a luminary who has helped bring Indian fashion to the global stage was conferred with Honorary Doctorate, Doctor of Literature (D.Litt.) Honoris Causa by Chitkara University.

Chitkara University presented Sunil Sethi with an Honorary Doctorate, Doctor of Literature (D.Litt.) Honoris Causa, in honour of his unparalleled and invaluable contribution to ‘Humanity, World Peace and Education’ owing to his inspirational journey as a role model business leader and his stellar role in creating significant impact in the domain of ‘Business of Fashion’ and community outreach.

Sunil Sethi, is the current President of the Fashion Design Council of India (FDCI), an accomplished fashion industry businessman and an eminent thought leader in the Indian fashion industry. Under his leadership, FDCI has been committed to taking Indian fashion to a global level by promoting the ‘Business of Fashion’. Since he accepted the role of President at the FDCI in 2008, it has grown to represent 350+ designers. His previous professional engagements include Senior Vice Presidentship at the Li & Fung Group, a multinational company with an extensive global presence and an operating sourcing network with 70 offices across 40 countries, and setting up Alliance Merchandising, a sourcing and buying company in 1988, having worked with premium global brands including Armani Casa, Crate & Barrel, and Anthropologie among its clients. Mr Sethi has also been credited with pioneering a host of successful ‘India-centric’ promotions in countries like UK, Ireland, Italy, Israel, Moscow, London, New York, Tokyo and Paris.

Since 2002, Sunil Sethi has taken more than 25 Indian fashion designers on to the global stage. He has done his best to propagate the ‘Made in India’ brand all through his career.In 2005, he was felicitated with the Lifetime Achievement Award by EPCH at the 14th Export Award Function, andin 2006, with the Lifetime Achievement Award by the Carpet Export Promotion Council, both sponsored by Ministry of Textiles, Government of India.

Dr Sunil Sethi delivered the valedictory speech, wherein he expressed gratitude and shared, “I’m delighted to be a recipient of this coveted honour, second to none other than His Holiness The Dalai Lama. I would like to thank Dr Chitkara and his team for giving me this award; I’m humbled. My work in the space of fashion and product design has always been passionate, as it drives me towards excellence. I hope the students of the University can take a slice from my life experiences of chasing your dream and making it happen.”

On occasion, Dr Ashok K Chitkara shared that, “The University is honoured to have Dr Sunil Sethi amidst us today – a stalwart of India Fashion Industry, an Entrepreneur extraordinaire, and a luminary who has helped bring Indian fashion to the global stage.  He has paved the way for young, ambitious designers to aspire for a global career. His work has and will continue to strengthen the Indian Fashion Industry through his role of a mentor, and President of FDCI. The University has previously conferred the degree to luminaries like Mr S. Ganesh Mani, His Holiness ‘The Dalai Lama’, Dr D.S Rana, Prof. Josef M. Ullmer, Mr Manish Sharma, and Mr Kailash Khatkar, and now including Dr Sunil Sethi in the list of luminaries is a delightful moment for us.”

Understanding the factors that shape gender attitudes in early adolescents and... 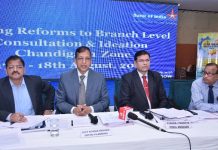 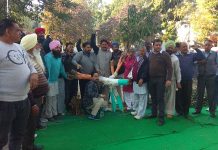 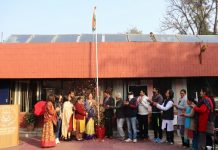 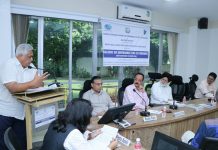