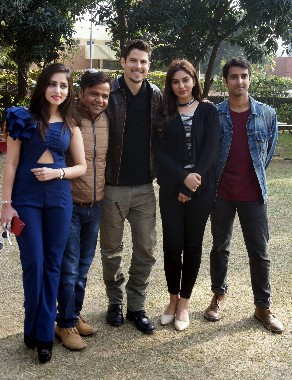 Football, soccer, as it is known in America, is a worldwide phenomenon.

Recent success of the Brazil World Cup and Under-17 World Cup in India is a testimony to that. Both events watched and followed by billions across the globe.

India a nation of over 1.3 billion people has never been to the senior World Cup even though football continues to be a big draw in the sports crazy nation. India did qualify for the World Cup once in 1950.

Barefoot warriors movie is based upon this incident only whose poster was released in Chandigarh Press Club on Saturday.

Barefoot Warriors is an inspirational journey, where dreams do come true and barriers and physical limitations are overcome by sheer courage and the drive to win, the heart wrenching desire to be someone…A winner.

Barefoot Warriors is being produced by Jatinder Jay Minhas, under the banner of Minhas Films LTD, a Canada based company. Jatinder Jay Minhas is a successful businessman, philanthropist and a community leader in British Colombia, Canada.

In Barefoot Warriors, lead character of Christian is being played by Sean Faris, a leading star of many Hollywood films and T.V shows, including “Never Back Down, an acclaimed drama series ”Reunion”,  “Life As We Know It ”, “ Vampire Diaries “, “Smallville”, “One Tree Hill” and “Boston Public”.

Barefoot Warriors is written and being Directed by “Kavi Raz”. an Actor, Writer, Director Based in Hollywood.