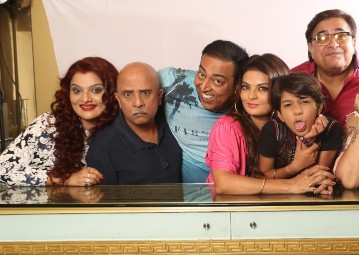 Well-known film and television actor Vindu Dara Singh and winner of third season of ‘Bigg Boss’ has forayed into production. His first venture as a producer is the Hindi comedy play ‘Golmaal – The Play’. It is directed by Lakbhir Lahiri and Lucky Hans. This satirical play which is of 2 hours’ duration will be staged on Saturday 26 May 2018 at 8:00 p.m. at Rang Sharda in Bandra (West). The play features Vindu Dara Singh himself with film actress Sheeba in the lead and is ably supported by Rajesh Puri, Payal Goga Kapoor, Lakhbir Lahiri, Surleen Kaur and Akashdeep.

‘Golmaal – The Play’ unmasks today’s education system and policies and how the parents have to take trouble for acquiring admission for their child. The play offers an analytical study of contrasts of mindsets and approach in a hilarious way.All the actors are veterans from film and television industry and are seasoned and power-packed performers. Directors Lakhbir Lahiri and Lucky Hans are household names in Punjab as well as its film and theatre industry. Lakhbir Lahiri too is super hit comedian and will also be seen performing in this play in an unusual character.

Actor –turned- producer Vindu Dara Singh is excited about his first venture, “Comedy have grown more appealing with the passage of time. ‘Golmaal – The Play’ is a light entertainer dealing with the realistic aspects of educational system. These days the lives of almost everyone are hectic and disturbing. If we succeed to make them happy and laugh heartily for two hours, then that will be our greatest award.”

The script of ‘Golmaal – The Play’ has been written by Lucky Hans. Akashdeep is the creative director. The play will be staged on Saturday, 26 May 2018, from 8:00 p.m. onwards at Rang Sharda in Bandra (West). After the Mumbai show, the play will be performed at Surat, Pune, Delhi, Hyderabad, Ahmedabad, Vadodara and also abroad like Dubai and America.