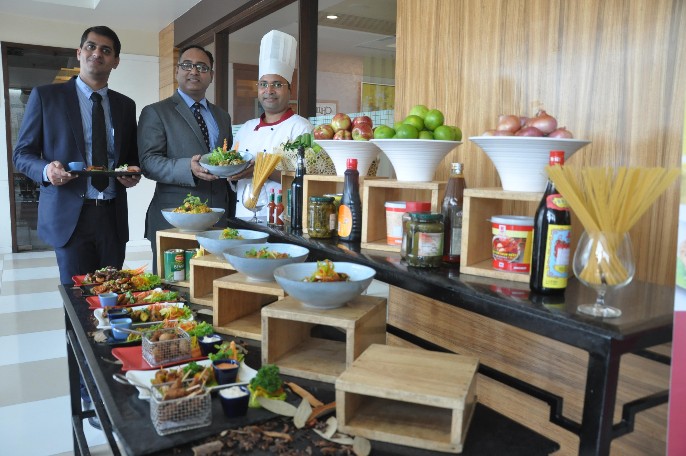 For all those vegetarians who always found options limited, while eating out compared to their non veg counterparts, and who probably also thought that non veg food was tastier vis-a-vis veg food, there is reason to cheer. A one-of-a-kind food festival – ‘Googly Veg Food Festival’, has kick started at Hometel Hotel, Industrial Area Phase I here. The festival which is a vegetarian’s paradise will be on from September 13 till September 22, in a buffet setting, from 7:30 pm till 11 pm, at ‘Flavours All Day Dining’ restaurant housed in Hometel. The fiesta has on offer some very interesting veg offerings cooked & presented in non veg style, there’s even veg chilly chiken!

Nabendu Acharjee, GM, Hometel said, “The food festival has been innovatively named and conceived by our Executive Chef Bidesh Biswas. Googly means a ball in cricket which one expects to be a leg spinner but actually turns out to be an off spin ball. The googly here is the food as it is not what you would initially expect it to be. The names of dishes and even their taste give them a non -vegetarian appeal. What’s more, their presentation gives them a non-vegetarian look. However, actually everything is pure vegetarian and we have not even used egg in the recipes.”

The announcement of the not so usual food festival was made by Nabendu and Bidesh Biswas, Executive Chef, Hometel, during an exclusive preview of the fiesta, held for media at the hotel’s premises.

As soon you step into the food fiesta you will witness an endless variety of vegetarian dishes- named and cooked in non veg style. Two live counters have been established to tickle your palette. One live counter at the food festival is displaying the preparation of ‘Akbari Tawa Champ Masala’ & ‘Malai Champ Rolls’ in snacks. Here, there are a bevy of options for those who want to taste vegetarian delights of a different ilk. In starters there is Veg Gilafi Kebab, Veg Fish Finger and even Veg Chilly Chicken. The main course includes Prawn Malai Curry (Veg), Veg Grilled Fillet with lemon butter sauce , Slice Soya Champ & hot garlic sauce etc. The other counter offers delicacies in snacks like Irani Soya Tikki and Soya Nuggets. The main course here is Veg Prawn Masaledar, Soya Kali Mirch and even Veg Duck in hot garlic sauce among others.

Speaking on the occasion, Bidesh Biswas said, “We are the first ones in North India to have introduced this type of an eating concept. Keeping the vegetarians in mind we have developed this unusual genre of cuisine and all the dishes have a base of soya and vegetables. Soya as a base is used as it is purely veg and definite shapes can be given to it to make it akin in looks to non veg offerings. What’s more, it has got the same proteins as non-veg food & the way we have used condiments & ingredients, it also gives an aroma & taste somewhat identical to non veg food.”

In soups, the festival is presenting delectable ones like Tomato Cappuccino, Noodles & Mint Soup etc. The dessert section is quite holistic. Malai Champ, Angoori Rasmalai, Balu Shai, Chena Toast, Gheber Malai, Mawa Roll are on offer among others.

So mark your diary for:

‘The Brew Estate’ launches mesmerizing menu across its outlets