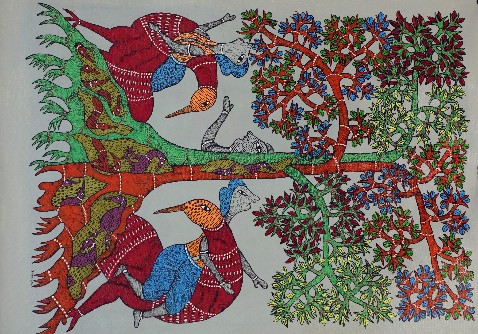 The 11-day long Aadi Mahotsav, an initiative of the TRIFED and NZCC, which is currently underway at Kalagram, Manimajra (Chandigarh), here, has emerged as the perfect Mecca for shoppers and art aficionados from various parts of the country. Acclaimed artists and artisans from as many as 25 states of the country have arrived here on invitation to showcase their traditional art and craft. The galaxy of artists here includes Gond painting artists from Madhya Pradesh. We catch up with a famed Gond artist Puroshotam Khushram, who faces a volley of queries and question from the nosey scribes and others about the rare Gond paintings his family had been pursuing for decades. He tells us about how he got into this profession to carry forward the family legacy and to live his inborn passion for painting. He gets candid as he tells us in a brief interaction.

Gond paintings are a form of painting inspired by folk and tribal art that was practised by one of the largest Gond tribes in India where it derives its name. Gond comes from the Dravidian expression Kond, which means the green mountain. While the specific genre of Gond paintings is believed to be primarily from Madhya Pradesh, but it is quite popular in Andhra Pradesh, Maharashtra, Chhattisgarh and Odisha. The specific art form that remained neglected for years now has caught the fancy of the Government of India, which has been doing a precious little to preserve and promote the rare of the rarest tribal art form.

The history of the Gond tribes and the genre of painting they pursued, heart and soul, dates back to circa 1400 years. However, the tribe imitated their master ancestors as corroborated by the cave paintings of the times dating back to the Mesolithic period. Passion for paintings and other art forms had been quite popular among the tribal people in India, especially the Gond tribe. Even amongst the Gond tribe, Pardhan Gonds were master painters of the times and had an ear for divine music. The Gond people were hard of conviction that that viewing a good image begets good luck. The abiding belief led the Gond people to embellish the walls and floors of their houses with traditional tattoos and motifs painted in natural colours suiting festive occasions.
According to a popular Gond belief, every non-living object, be it a hill, river, rock or a tree, is inhabited by a spirit and, therefore, is considered sacred. The Gond tribe paints itself as something to be respected and revered. Gond paintings are a reflection of the mans eternal connection with nature. While a good number of Gond paintings do take inspiration from nature, others are not just stuck to the age-old belief to pursue the passion. Gond paintings are greatly inspired by myths and legends of the country and showcase images from the day-to-day lives of the tribe. These may showcase abstract themes, such as emotions, dreams and imagination, et al.

The Gond paintings adorning the walls of every tribal home with a miniature painting in vibrant colours and contours depicting recurring floral and faunal themes dedicated to the reigning deities, gods and goddesses. To mark festive occasions, like Karwa Chauth, Diwali, Ashthami and Nag Panchami, Gond paintings become a recurring theme of a celebration and ritual. Another striking facet of Gond paintings is the use of bright and vivid colours, such as white, red, blue and yellow. The paints are usually sourced from natural objects, such as charcoal, coloured soil, plant sap, leaves and even cow dung. More specifically, the yellow colour is derived from Chui mitti  which is a type of sand, brown from Gheru mitti, which is another type of sand, green is readily procured from the leaves while the red from the Hibiscus flower. The Gond paintings can best be described as line work, in which an artist makes sure that the lines and dots he draws are drawn with extra care and circumspection so as to invite the imagination of the inquisitive viewer. The lines, dots and dashes are added to impart a greater sense of movement and increase the amount of detail. The paintings are essentially invocatory in a sense that seeks to offer worship to nature as also seeking protection and warding off the evils.
Before we wrapped up the interaction, Puroshotam says The modern Gond paintings have moved from the walls on to the canvas. These are not painted on walls and floors as these used to be in the times gone by. They are now painted on canvas, which is a more taxing job. This makes sure that these are not only convenient to transport and even hang on a wall, but also helps the paintings to stand out among those painted on the wall. Due to the scarcity of natural colors in the times now, Gond artists have started to use poster colours, which are easily available in the market. The use of canvas has made the new-age Gond paintings much more vivid than the traditional ones