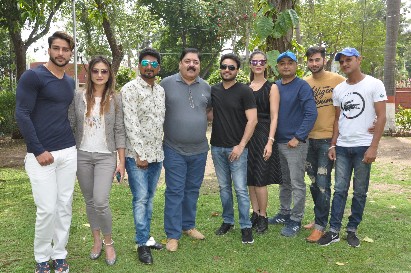 To provide a reliable platform for the talented singers of tricity as well as Punjab, a team of professionals with more than twenty five years of experience in the entertainment industry, has unveiled a unique start up — Garima Production. This was done formally by holding a press meet with R P Singh, Founder & Director , Garima Production, the Director of Photography and in house Choreographer of the novel initiative. As the main focus of the production house is on singers, the launch of the same was  accompanied by the introduction of audio singles of two talented singers from Punjab. While one was a debut track of Gurjinder Billu the other was of well known Punjabi singer Surinderjit Maqsoodpuri. Maqsoodpuri is known for his tracks like Pyaar Ma Baap Da, Rona nahi aunda among others. Maqsoodpuri’s new audio ‘Fer Kahin’ and Billu’s debut track ‘Dil wichon’ were released to officially signal the start of operations of Garima Production.

“To start with, these two singers will be given a platform to promote their talent with us. Punjab is a state of singers and we are blessed to have this talent growing continuously. Through this production house, we wish to act as  a facilitator to showcase the talent of a singer to an audience in a professional & hassle free way. We have the experience as well as the required tie ups with various companies which will prove to be a great support for the singers. We will also provide help to talented singers who do not have the financial resources.”, said R.P. Singh, Founder  & Director, Garima Production.

“We will produce films in which talent from the region will be accommodated. Our team will also produce music albums both audio and videos for singers at competitive rates and we will also take up the promotion of the artist in a big & well coordinated way.” Adds Singh.

It is noteworthy that Singh, has got an experience of more than 25 years under his belt as a Producer -Director. He was the Executive Producer of Punjabi film- ‘Fateh’ and the Hindi movie – ‘Zindagi’. He has also worked for Jalandhar as well as Chandigarh Door Darshan. The dynamic R.P. Singh has made  telefilms like  Jeevansathi (Hindi), Shaadi Lal (Hindi), Raftar (Punjabi) and Adhoora Sach (Punjabi) for DD. Not only this, he was the first Independent Producer to have made a music programme- Goonj for Door Darshan. It is this experience which Singh wishes to share with young artists.

“I consider this day as an important one for Punjab’s Entertainment Industry. Garima Productions will fill in the gap in the Industry of a professional facilitator for singers. It will generate a congenial environment for the youth of Punjab who are often misled and exploited in their attempts to be recognized,  by companies which fleece them financially and do not provide output as promised.” Said Singer Surinderjit Maqsoodpuri, who has also signed up with Garima Production and who’s song was released at the event.

“I consider myself blessed to be here today. Having talent is one thing and presenting it before people is another. I thank Garima Production for the support they are providing to me and other artists looking for an opportunity”, said singer Gurjinder Billu, who’s debut track was unveiled under the banner of Garima Production.

Apart from being a production house, the organisation plans to conduct auditions which would provide work to the artists having diverse skill sets like singing, acting, dancing etc work in the films which will be produced by the production house.

“We will work for propagation of the rich Punjabi culture and will try to buck the trend of filthy lyrics that promote violence, drugs etc. This will be done through usage of  pure words depicting the real Punjabi heritage and culture.” Sums up R P Singh.

Sanjay Tandon congratulates J. P. Nadda for being appointed as...