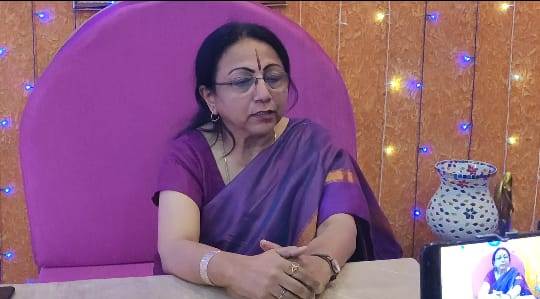 Chandigarh
8 August 2019
DIVYA AZAD
Renu Mathur, a social activist known for women empowerment movements and Pad-woman of India expressed her concern for Punjabi music and entertainment Industry.
While addressing media, Ms. Mathur shared her views on a recent incident where model’s wardrobe malfunction incident during the shoot of a song of a well known singer Gagan Kokri’s was just passed as an accident. Reports mention that model’s dress was not tied properly due to which she had an embarrassing moment during the moving shot of the said song.
Immediately after this incident and also after the incident got viral Ms. Mathur started receiving complaints from the people from various locations. Ms. Mathur said this incident was a shock. After this serious offense nobody took responsibility or a moral obligation to even know the impact and consequences such a public issue may have.
Renu Mathur said “This is very shameful incident and is a question mark on the safety of women in the Entertainment Industry. Considering Singer Gagan Kokri is a big name in Punjabi Music world, and everybody must have faith during the shoot, he is expected to behave as a team leader that time and its his responsibility to keep the things smooth, even after this incident he should had ensured That no one is having any clip or recording, but he showed his ignorant and careless attitude as a result, girl had to faced big shame in front of society. To this effect, I categorically feel that this could have been stopped had Gagan stepped in to  stop this nonsense.
Further Ms’ Mathur said ‘Singer Gagan Kokri should feel sorry publicly to the model and take moral responsibility of this huge cyber crime. If  it doesn’t happen than I along other women empowerment members shall take some strict action against this singer even we may take help of law in it if needed.

The Leiden-Sarin Trophy returns to India