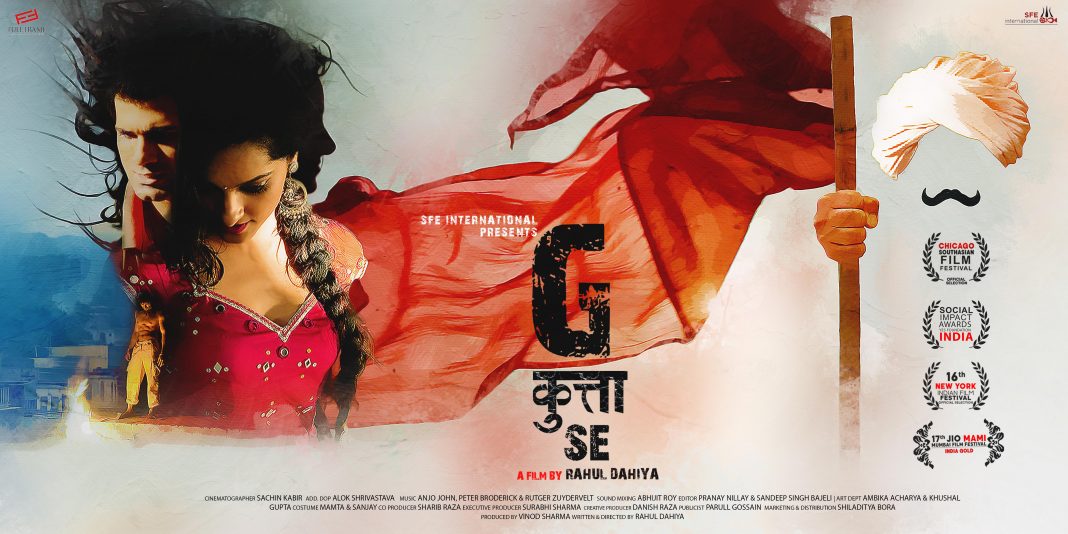 Rahul Dahiya’s debut feature film G Kutta Se is slated to release across the country on June 9th, 2017. The film made its world premiere at the Chicago South Asian Film Festival, and was also an Official Selection at the New York Indian Film Festival 2016 and the 17th JIO MAMI Mumbai Film Festival. The film was also nominated for the YES Foundation Social Impact Awards in 2016.

After the Anushka Sharma starrer, NH10 in the recent past, G Kutta Se, is a bold and daring attempt on the controversial subject of Honor killings in India. A taboo topic seen through the lens of realism, a refreshingly different and very tangible take on a subject films so far have just skimmed upon.

Set in Haryana and filmed in a mix of Hindi and Haryanvi, the film features an ensemble cast comprising of Rajveer Singh, Neha Chauhan, (of Love Sex aur Dhoka fame) Nitin Pandit, Rashmi Singh Somvanshi, Sandeep Goyat and Parth Sharma. G, pronounced as jee, is used to denote the kind of rebellious desire that the youth is punished for by the patriarchal society.

Writer-director Rahul Dahiya, who hails from Haryana, has drawn upon his own personal experiences to paint this searing portrait of regressive sexual mores in India’s rural villages.  He says: “Every year thousands of girls are killed by their own families, sometimes by their own mothers, fathers or brothers. The reason is not always linked to the family’s “honour” as is the broad assumption, rather is often driven by jealousy, sexual vengeance, and an interplay of ego and power. I made this film to expose the hypocrisy surrounding sex and the simmering brutality even in our so-called prosperous villages.”

Dahiya has previously worked as an assistant on Sudhir Mishra’s films Khoya Khoya Chand, Tera Kya Hoga Johnny and Aur Devdas. The film has been shot on real locations using many non-professional actors from the area to give the film its sense of realism. Produced by Vinod Sharma, the film will hit theatres across India on June 9.

Synopsis: In a small village not too far from Delhi, three lives explode around taboos of love and lust. Diksha, still just a girl, is caught unguarded on camera, besmirching the “honor” of her parents. Kiran, in love with the wrong boy, becomes the target of another man’s lustful vengeance, “dishonoring” her family. And Virender, a young man cruising the streets at will, enjoys all the acts society forbids women, protecting or destroying their “honor” as he wills. Set in the hinterlands of Haryana, known for high rates of female foeticide, G explores the murky world of sexual transgression and honor killings in India.