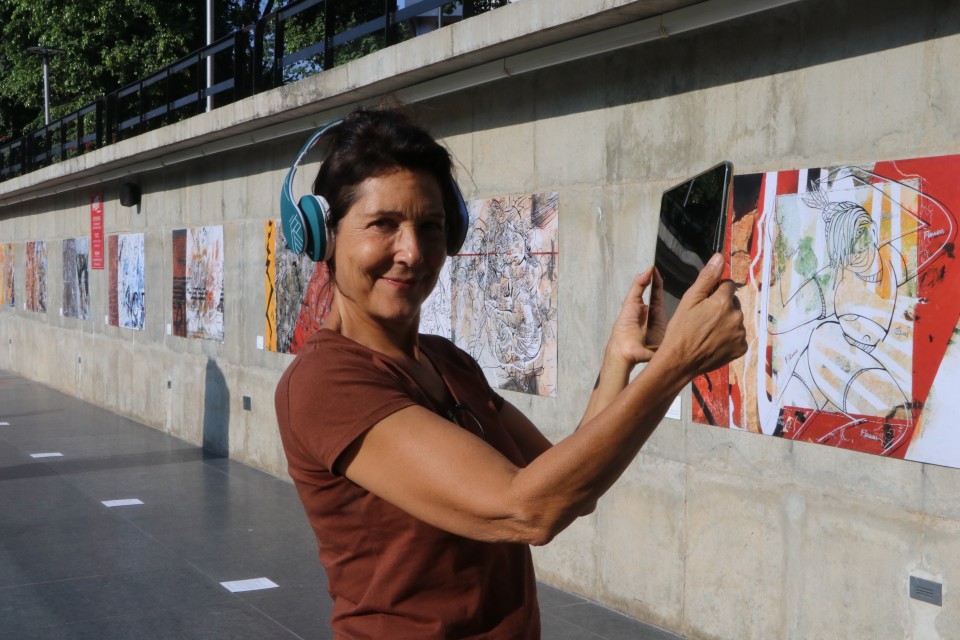 The first ever augmented reality (AR) Exhibition by French artist Béatrice de Fays is an art illustration that is a must see. The exhibition which is underway at the Sector 16/17 underpass here has 12 paintings on display, which narrate a story of a woman, a man and a child, taking you into a different world of AR (sound and image).

The exhibition is on till Sunday at the underpass from 12 noon to 5 pm and at Alliance Française, Sector 36 on Monday from 5:30 pm to 9 pm. The project has been supported by the French Institute in India and Alliance Française.

This artwork is composed of 12 paintings from which a story unfolds in augmented reality inspired by the granite rocks of Hyderabad on the Deccan plateau. Titled, ‘A Woman in the Dance City’, the paintings narrate the story of a woman in Hyderabad. But what sets this apart if Beatrice’s use of AR.

In this series, a visitor sees 12 entities, spaces and energies: the Buddha of the rocks, the dragonfly, the tree, the source, the rest, the dance.

“In AR, you can use sound, 3D and movement. The idea as to combine digital and material and using this, I have tried to show people my perception of the world. I have used some sceneries too in my work”, says Beatrice.

A Buddhist, the artist has included Buddha in her works. “It is about how a girl meets Buddha and how he teaches her the way of life”, she explains, adding, she took about two years to complete the series.

Visitors can watch the paintings come alive by downloading in.space app and scanning each painting to discover spatial, narrative and sound dimensions.

The “in.space” application for Android and Apple (downloadable from Google play or Apple store) allows you to discover the augmented reality linked to each painting from a phone or tablet. Visitors enter the AR universe by scanning each painting using the “in.space” application previously downloaded on a mobile device. The use of headphones or earphones is strongly recommended to live the experience more intensely. By moving through the works with their mobile device, the visitor discovers their spatial, narrative and sound dimensions. Thus, the pictorial space unfolds in front of the painting in a dematerialized universe.

Besides conceptualising and painting, artist Béatrice de Fays has given a voice over to the exhibits along with Bari Kumar. Music is by Mathieu Constans and Guillaume Evrard is the AR Developer.

Béatrice de Fays, aka B2Fays, is a French-Belgian artist. She develops her creations using diverse media: paintings, illustrations, video projections, local or network interactive installations and augmented reality. In 1984, she realised that creation was the only way for her to evolve in a universe. She refused to join an art school, and began her self-taught career in Paris.

Her first comic strip was published by Philippe Manœuvre of the Humanoïdes associés publishers. Her work then appeared in magazines (including Métal Hurlant), fanzines, and on television. In 1985 she participated in the first exhibition of images made with graphic palettes titled “Palettes Pauvres – Images Riches” (Poor Palettes – Riche Pictures) held at the George Pompidou Centre in Paris, France. In 1987, she was selected for the SIGGRAPH Art Show held in California, USA. In 1988, she exhibited her work at the Ministry of Culture in Paris.

The transition from comics to painting happened following the publication of her work in the comic strip newspaper Zoulou in 1986. An art lover ordered a 3-meter-long canvas painting of one of the published panels. This life-sized painting and the involvement of the whole body to achieve it, made the artist aware of the positive impact of this medium on herself, both physically and mentally. After this experience, she distanced herself from digital images, and worked exclusively with material picturization.

Around 1994, all her paintings were destroyed in a fire. This shock made her aware of the fragility of matter and decided to once again turn towards computers, but this time to integrate the viewer into the creative process and share the experience.

In 2008, she designed a display consisting of two interactive networked installations at La Géode (La Cité des Sciences, Paris), and the Nehru Science Center, Mumbai, India, where visitors could meet, interact and create together, in real time, 7000 km apart.