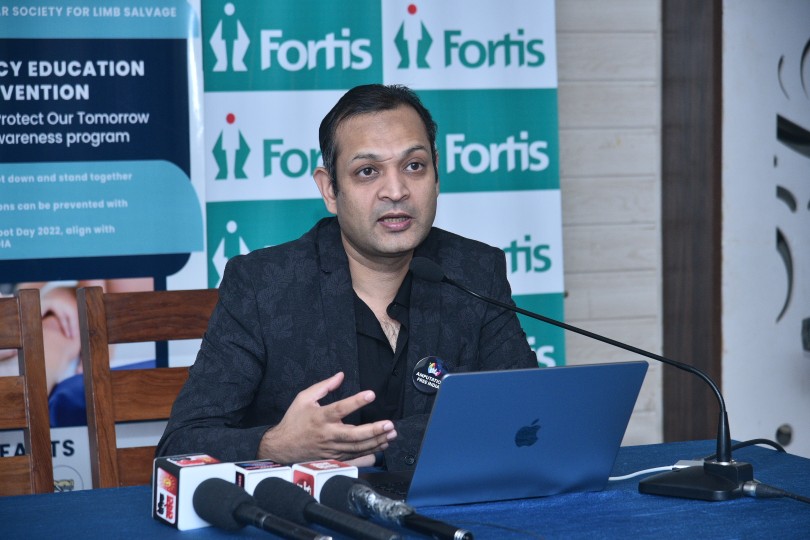 A city-based woman, aged 48, was undergoing an extremely difficult time owing to acute gangrene on her left foot toe along with cellulitis extending up to the ankle. Cellulitis is a serious bacterial infection in the deep layers of the skin. Owing to gangrene, the Patient’s movement was not only restricted, but she was in extreme pain and on the verge of getting her leg amputated. Co-morbidities such as diabetes and hypothyroidism had further complicated her health condition.

Unable to bear the pain and discomfort, the Patient approached Dr Ravul Jindal, Director, Vascular Surgery, Fortis Hospital Mohali, in September this year. Medical evaluation diagnosed the Patient’s condition as Distal Vessel Disease, which can cause great difficulty in healing the ulcer.She had also developed sepsis andany delay in treatment would have caused serious consequences to her health.

The team of doctors led by Dr Jindal administered intravenous antibiotics to the Patient and conducted debridement of the wound. The Patient was also given anticoagulants (prevent blood clots) and anti-platelets (help make the blood less sticky). Following good rehabilitation at Fortis Mohali, the Patient was able to recover from the sepsis and discharged six days after the treatment on 1st October. Her leg was saved from amputation and she was able to resume her daily activities four weeks after the treatment.

Discussing the case, Dr Jindal, said, “The Patient had developed septicaemia and acute gangrene. We could save her leg from getting amputated and cured her of the gangrene. She made a swift recovery and will be leading a normal life soon. Patients with diabetes run a risk of developing peripheral vascular disease (PVD). This can cause cellulitis and gangrene. But timely medical intervention can help prevent the diseases from progressing and turning fatal.”

Shedding light on the health problems associated with diabetes, Dr Jindal, added, “Diabetes is a leading cause of stroke, heart attack, kidney failure and PVD. The disease mainly affects people who have had diabetes for more than 10 years, uncontrolled sugar levels along with associated history of blood pressure and smoking.”