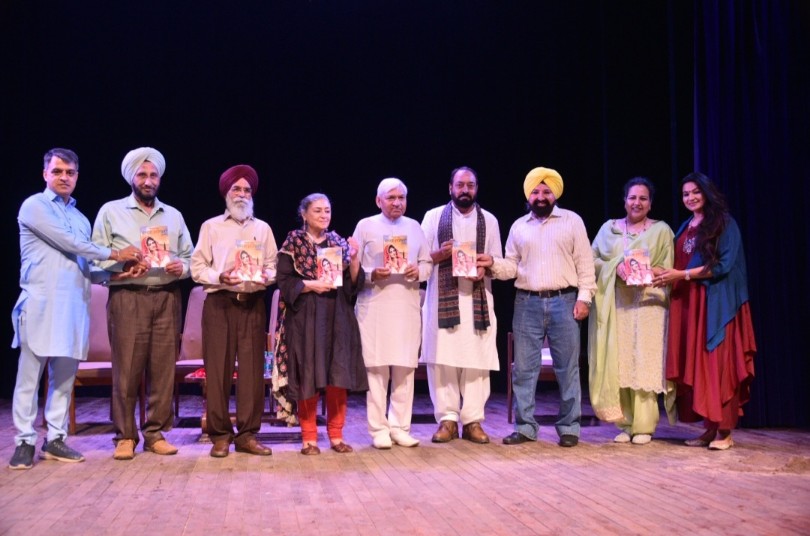 The Narrators, a performing arts society in association with Punjabi Lekhak Sabha Chandigarh and Punjab Sangeet Natak Academy organised a ‘Launch-Cum-Art Lit Adaptation’  event of a book based on a play written by famous Punjabi playwright Balkar Sidhu – ‘Sassi Punnu’. The play ‘Sassi Punnu’ written by  Balkar Sidhu originally in  Punjabi and encapsulated in a book has been translated by The Narrators in English, and the translated version of the book was unveiled at the event.

A unique Art-Lit Adaptation of a few scenes from the book ‘Sassi Punnu,’ authored by Balkar Sidhu, which was designed and directed by Nisha Luthra, founder-director, The Narrators, marked the event, attended by the who’s who from the world of art and literature associated with the region.

“The art lit adaptation of a few important scenes from ‘Sassi Punnu’ touches upon different facets of human emotions and sentiments. Balkar  Sidhu, being the president of Punjabi Lekhak Sabha, Chandigarh, and Vice Chairman of Sangeet Natak Academy, is working hard for the revival of folk tales and culture. This play is a fine example of his noble ambitions,” said Nisha Luthra, whose art direction conveyed the essence of the play succinctly and effectively.

Balkar Sidhu said, “The book launch was unique as it was accompanied by a very creatively designed art lit adaptation directed by Nisha Luthra based on the play written by me. I am happy that the English translation of  ‘Sassi Punnu’ is now available and this will help the iconic love folklore spread to a wider audience not only in the region but even in other parts of India  and even the world.”

The distinguished dignitaries who unveiled the book based on the play ‘Sassi Punnu’ written by Balkar Sidhu on the sidelines of the art-lit showcase were Padma Shri Dr Surjit Patar, renowned Punjabi poet and writer, and Padma Shri Dr Neelam Mansingh Chowdhry, a prolific theatre director.

It is to be noted that the original play was written in ‘Saraiki Multani’ and was later published in the year 2019 in Punjabi and was recently translated into English by Team Narrators. The aim behind this endeavour was to share this legendary play with a larger and more diverse audience, added Nisha Luthra.

Jasvir Kumar fascinated the audience with his exceptional portrayal of Punnu whereas Manpreet Mann left everyone awestruck as Sassi. Balkar Sidhu, Rajan Bhateja and Lakhwinder Singh did justice to their characters by playing Punnu’s brothers. The whole team dazzled the audience with its storyline and gave everyone a taste of the rich Punjabi culture and heritage.

The event was gracefully hosted by Nikasha Luthra and Dyutima Sharma, who also assisted in the direction of the art lit adaptation. The book is available on Amazon and in all major book shops of Chandigarh, Panchkula and Mohali. Another highlight of the event was a revealing conversation between Padam Shri Surjit Patar, Padma Shri Dr Neelam Mansingh Chowdhry, Balkar Singh Sidhu and Nisha Luthra. The conversation was moderated by senior journalist Jupinderjit Singh.

Among other members of the administrative team of The Narrators who were present during the event were Rajinder Singh, Manika Mahajan, Deepa Singh, Mandeep Singh and Ravi Kohar.