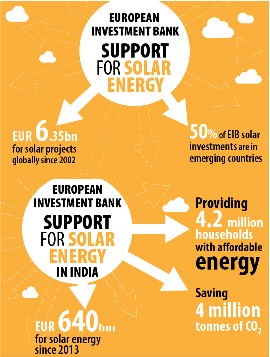 Werner Hoyer, the President of the European Investment Bank- that is the public Bank of the European Union -will be participating in the first summit of the International Solar Alliance (ISA) in Delhi on December 11.

In parallel on March 10, President Hoyer will be signing a new loanfor large and small clean energy projects all over India. This is part of a EUR 800m EIB investment in renewables in India most of which will be solar – announced last year.

This is the initiative from PM Modi and President Macron to spread solar and provide affordable energy to the 121 countries in the ISA by improving financing, sharing technology and crowding in the private sector.

Last year the EIB signed a partnership with the International Solar Alliance aimed at supporting the initiative with EIB financing and expertise in particular the experience of crowding in the private sector. Werner Hoyer is in Delhi at the Summit on March 11 to lay out how that support can work and pledge the EU Banks commitment.

In parallel on March 10, in the presence of President Hoyer, the EIB will be signing a new loanfor large and small clean energy projects all over India. This is part of a EUR 800m EIB investment in renewables in India most of which will be solar – announced last year.

On March 9, an all women roundtable of Delhi-based gender campaigners, environmentalists and finance experts will join the head of the EIBs Global Partners Division Maria Shaw Barragan for a Facebook Live debate in Delhi with a live audience to debate how to Make Climate Action Count and ask who really benefits , and how to make sure projects take the concerns of women on board . It’s timed to coincide with International Women’s Day as well as the ISA. Do join us at https://www.facebook.com/EuropeanInvestmentBank and send your questions live!

Around 6.35 billion euros for solar projects around the world since 2002,
*In the last 7 years half of this has been countries outside the EU (in developing and emerging economies.)
640 million euros of EIB investment in solar investment has been approved for in India,
*These solar projects will be providing nearly 4million households with around 4000 gigawatt hours of clean and affordable energy, saving nearly 4 million tonnes of harmful CO2.

Last year 800 million euros was announced by EIB for signed and approved renewable energy projects in India – a record renewables loan for Asia.