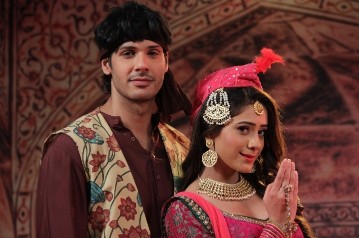 Sony SAB’s ‘Jijaji Chhat Par Hai’ which chronicles the nok jokh (sweet banter) between Pancham (Nikhil Khurana) and Elaichi (Hiba Nawab) has recently witnessed a lot of drama and twists which makes the show even more interesting. Keeping up the promise, the makers have lined up some even more entertaining tracks.

For starters, Jijaji Chhat Par Hai will now see the entire cast in different avatar. The entire cast will be seen enacting famous Indian love saga of Sohni – Mahiwal as a play on an auspicious occasion of Lalits uncle’s grandfather’s 80th birthday.  The preparations will start with Elaichi’s best friend Sunita (Raashi Bawa) and Elaichi trying to convince Pintu (Harveer Singh) and Pancham to be their Mahiwal respectively. Elaichi with her tricks steals some expensive lehengas from her own shop putting Pancham’s job in danger, she then emotionally blackmails Pancham to play her Mahiwal.

To add to the fun and confusion, the prankster that Elaichi is, she messes with the entire script so that everyone  gets to play a part and the show now starts as Sohni and Mahiwal in Akbar ke Darbar. The beautiful Elaichi portrays the role of Anarkali who is in love with Mahiwal (played by Pancham) instead of Salim and is requesting Akbar played by Murari for his permission to marry him. On the other hand Sohni aka Sunita is in love with Darbaan played by Pintoo. Making the play hilarious and interesting, Elaichi leaves no opportunity to tease and trouble her ‘Jijajij’, she makes him dance with her while Sunita dances with Pintu as per the changed script. Lalit’s Dadaji gets furious wondering who interchanged the script and demands to know the real culprit.

Will Elaichi confess it was her? How will Lalit’s Dadaji react to this?

Talking about the upcoming track, Hiba Nawab aka Elaichi said, “The hilarity on the show will reach its peak with the most interesting track coming up. It was very exciting to be dressed in a period drama costume of Anarkali. Elaichi always finds a way out and get things done ordering to her wish by putting others in trouble. This time too, she blackmails Jijaji to play opposite her in the play at the same time tries to accommodate all members in the play. The Sohni Mahiwal with a Mughal – e – Aazam twist is worth watching. We had a lot of fun in shooting this sequence and am really looking forward for the audiences reaction.”