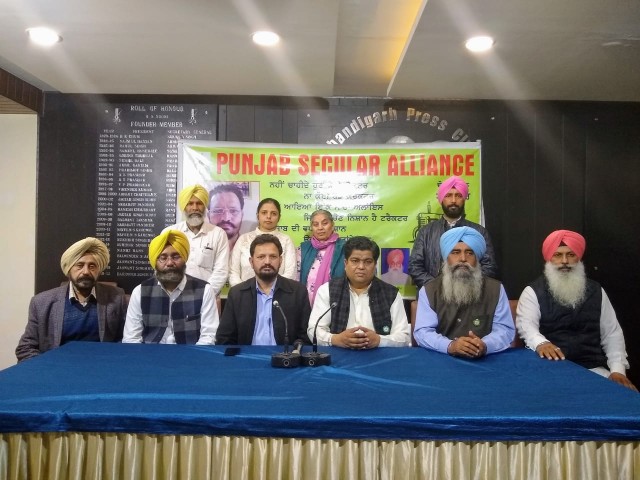 “Rashtriya Jan Shakti Party (Secular)” has been officially inaugurated in Chandigarh today, Mr. Charanjit Singh Azad nephew of Kanshi Ram a renowned former Indian politician is a convenor and Raja ji is a National General Secretary of Rashtriya Jan Shakti Party (Secular). The party will contest election for all 13 seats in Punjab. Under Mr. Azad’s and Mr. Raja’s fellowship an alliance of different parties from Punjab has been made, five to seven parties have joined the alliance among those parties the final shortlisted candidates from each constituency declared in the press conference. These parties for the alliance include –a national level agitational group ‘ Savidhan bachao Desh bachao’ whose national Vice President is   Mr.Charanjit Singh Azad , and national President Dr.Raj Ratan great grandson of Dr.BR Ambedkar, Rashtriya  Janshakti Party (Secular) whose national general secretary is Raja ji , Lok manch Punjab whose President is Mr Najar singh and wife Mrs. Surender kaur who will be contesting elections for the seat from Anandpur Sahib . Rashtriya Jan Shakti Party Secular is being supported by Swaraj and Bharti kisan union. Bharti kisan union vice president Balvinder singh bajwa and general secretary Swami Inder graced the conference with their presence.

Present on the occasion Mr. Charanjit Singh Azad, Convenor Punjab Secular Alliance  said, “the objective of the conference is to declare why this alliance has been made and what all things will it do for the benefit of the people. We all know that the system of our country is completely destroyed and common man is suffering because of this system it has become very difficult for them to make a living .The various big political parties like congress , BJP , Akali ,  and many others have just become the looters who are looting money from people .Instead of solving their problems and providing them with their basic needs they have exploited them  so I would like to raise a question what’s the difference between them and the britishers . Though Britishers have ruled us, looted us and harmed us it’s a different matter but the people living in our country who call themselves Indians have become black britishers who are exploiting the common man and the poor people of our country who are innocent and who barely get their basic needs. From education system to health every system is suffering , prices are rising day by day from school to practical’s everything has become a trade so where are the basic facilities of the people are going. Seeing all this we want to do something different for our society which will benefit them.”

During the Press conference party discussed it’s different agendas like Making fair and equal education system ( it should be like whether each student should be in government school or there must be private schools for each student which will provide free education ) and also improving the quality of education because if he/she will not get proper education how they can think of doing something which they really want to do .These days students are getting degrees but they don’t know what they really want to do because of which their whole life is filling up with struggle so to clear that doubt we want fair and quality education for each student . Secondly they talked about improving Health system they aimed to provide free medical facilities to the people who are poor and earn less than 3 lakhs .They also said to provide free health facilities to these poor people from private hospitals for these health facilities party claimed to provide a separate insurance of 15 lakhs which will help the poor people suffering from big diseases. This 50% reservation will help the people from poor households who dies because of not getting treatment.

Parties one of the agenda is removing unemployment by getting employment from foreign countries or setting companies with government support .They said to try their best in building employment for the youth who are struggling unemployed after completing their degrees from college without knowing what to do we want to do because it’s the responsibility of every party who makes the government. Party also said about Revising existing policies for the corporate houses setting up in Punjab who will provide employment for our youth. The Party said we will not push the old policies but we will start everything from the beginning which will be in favour of the youth and the people.

Present on the occasion Raja ji, National General Secretary of Rashtriya Jan Shakti Party (Secular) said “our main focus is to give importance to those people who are once at the top in sports and now missing we want to make policies for them so that it will benefit them and the nation. Speaking further he said all the alliance we made will have same agenda and tagline of our alliance is “now we don’t need actors and bad characters here’s the alliance with a character whose symbol is a farmer driving a tractor.”

Party also said women empowerment to be one of its agenda reaching to the end party said we want to make the sports industry of Ludhiana and Jalandhar compete with China’s goods and work on how to make our goods cheaper than China so that we can compete with their costing. Party further said BJP government has given us GST and demonetization what are the pros and cons of these two we think that there is less benefit and more of damage, the small businesses have started earning less and we would like the media to raise question for PM Modi ji who as a CM criticized many policies but as a PM he is telling the same policies as good for the country if these policies are good for the country then he has sent the country 10 years back. Making United Hindu Nation, or making cow protectors (Gau Rakshaks) will do no good for the nation.