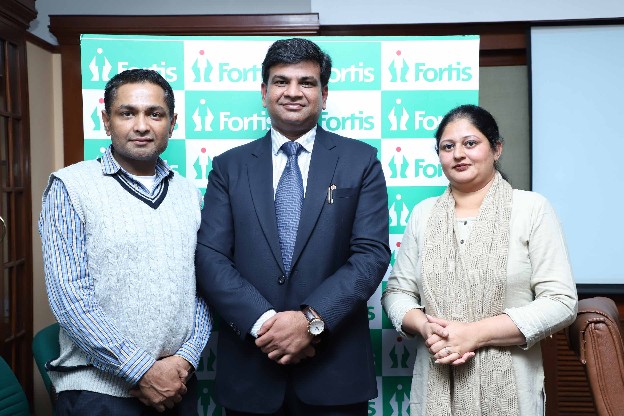 A team of doctors at Fortis Hospital, Mohali performed a rare medical feat – a first of its kind in the world – when they cured a tumour growth in a kidney – the living donor – that was further transplanted onto a recipient – the recipient – recently. The surgery was performed under the leadership of noted transplant surgeon Dr. Priyadarshi Ranjan, Senior Consultant in Urology, Robotics and Kidney Transplantation at Fortis Hospital, Mohali.

In the reported medical history, this may be the first time – in India and most likely in the world – that doctors have been successful in harvesting a living donor kidney after curing it off tumor. The tumor, which was sized at 3.7 cms X 2.9 cms, was excised post which the kidney was repaired & reconstructed. It was then transplanted onto a patient who was suffering from kidney failure. Both the patients, Ravinder Kumar Sharma (recipient) and Rosy Sharma, his wife (donor) have now recovered and discharged from the hospital.

Speaking about this landmark surgery, Dr. Priyadarshi Ranjan said, “In this era of organ shortage, such a unique surgery gives hope to many. It is a very meticulous and risky procedure, we thought to go ahead with it since the patient had no other choice and was unable to cope up with complications of dialysis. There was no other family member who could become a living donor for him except his wife Rosy, who was rejected by several noted hospitals in the country as one of her kidneys had a 4cm tumor.”

“Since the traditional curative surgery was also required for the donor for tumor, we thought why not use the same kidney for transplant if we can safely excise the tumor bearing part of the kidney. The tumor bearing kidney was taken out and we successfully removed the tumor on the table and were able to transplant the same kidney. A biopsy was conducted of the base of the tumor which was found to be tumor free, before transplantation,” Dr. Ranjan added.

Such procedure requires a high level of skill & Expertise to prevent risks of bleeding, urine leak and reoccurrence of malignancy. Fortunately, we have been able to achieve a good outcome in this patient. It’s been four months now and the patient is leading a healthy life after the newly transplanted kidney.