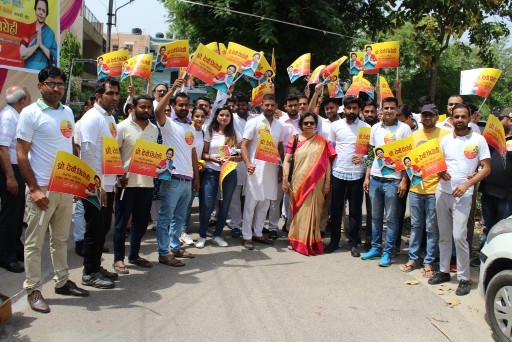 Students of Punjab University, residents of colonies and family and friends attended the Road Show of Devi Sirohi. For her support, more than 150 people gathered and went with her during entire road show.

During nomination, Devi Sirohi declared her property which is Rupees 3.5 crore. She has been called at DC office to take oath tomorrow.

Devi Sirohi and her supporters started the road show from her residence at Modern Housing Complex Manimajra then reached Kalagram Lights, Transport Chowk, Sector-26-17 Light Point and Circus Ground Sector -17, after that she filed nomination. She interacted with the journalists and then proceeded with the road show again from Sector 17 Circus Ground reaching Sector- 18,19,27,28, Transport Chowk, Kalagram Light Point and back at her residence at the Modern Housing Complex Manimajra Chandigarh.