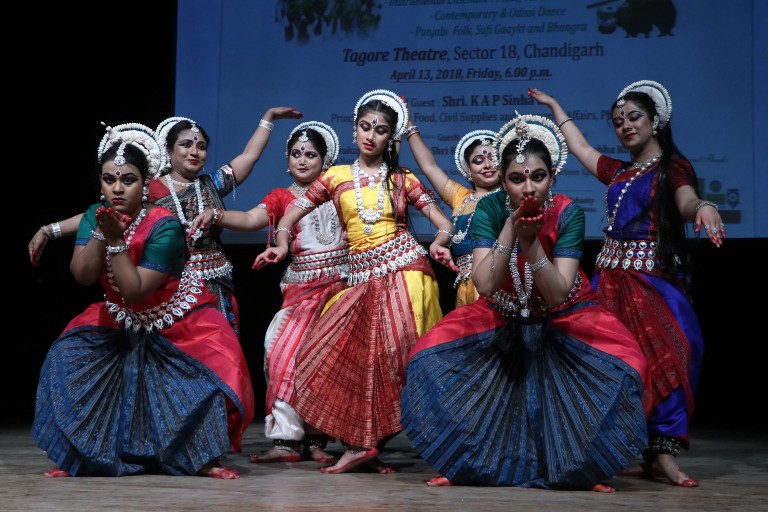 Sargam Society of Indian Music and Art (Regd.), Mohali organized a musical evening in Tagore theatre on the occasion of Baisakhi. In collaboration with Nrityabhinaya, Gurugram (Regd.), evening was decorated with Punjabi sufi and traditional songs. Festival of Baisakhi was given a different form as Odishi and contemporary dancers depicted the 10 devis on the stage. Kabita Mohanty, a dancer from Odisha along with her group depicted 10 forms of Goddess alive in front of audience. After this, group of 8 contemporary dancers led by Shimantika Basu introduced different forms of female power through their dance.

The program was a mixture of instruments, music, Bhangra, Sufi, folk,  Bhajan and film songs. Artists Debasish Adhikary and Chetan Joshi from Delhi and Ishar Singh from Punjab performed the vaadan music by playing tabla, strings and flute. After this, odishi and contemporary dance presentation was given by 16 artists in the second part.

Later, Punjabi songs, dances and bhangra took over the evening. Local artist Param Chandel, Asha Bajaj, Karamjeet Kaur and Neeru Porwal performed Punjabi Sufi and folk songs which was given dance support from dance artists Snobar Rupal, Dikshit Lamba, Udaivir Kohli and Priyanka Jindal. In the end, a group of some young artists presented bhangra and congratulated everyone on Baisakhi.